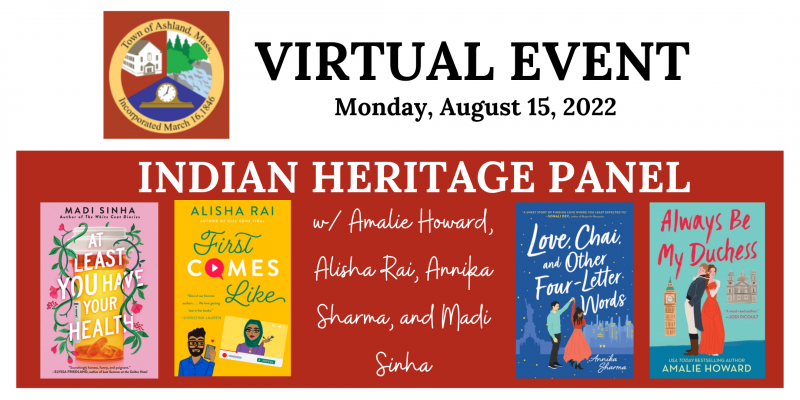 Amalie Howard: AMALIE HOWARD is a USA Today and Publishers Weekly bestselling novelist of “smart, sexy, deliciously feminist romance.” The Beast of Beswick was one of Oprah Daily’s Top 24 Best Historicals to Read. She is also the author of several critically acclaimed, award-winning young adult novels. An AAPI/Caribbean-born writer, her books, interviews, and articles have been featured in Entertainment Weekly, Oprah Daily, Seventeen, and Ravishly Magazine. When she’s not writing, she can usually be found reading, being the president of her one-woman Harley Davidson motorcycle club #WriteOrDie, or power-napping. She currently lives in Colorado with her family.

Alisha Rai: Alisha Rai writes award-winning emotionally complex contemporary romance novels and is frequently sought as a speaker on a range of topics covering romance and media. She is the first author to have an indie-published book appear on Washington Post’s annual Best Books list. Her books have also been featured on the IndieNext and LibraryReads lists, and been named Best Books of the Year by NPR, New York Public Library, Vulture, Reader’s Digest, Entertainment Weekly, Amazon, Kirkus, Bustle, “O”, the Oprah Magazine, and Cosmopolitan Magazine. When she’s not writing, Alisha is traveling and tweeting.

Annika Sharma: Born in Delhi and raised in central Pennsylvania, Annika Sharma followed her Penn State-loving heart to college in Happy Valley. There, she graduated with two Bachelor's degrees in Biobehavioral Health and Neuro-Psychology. She also holds two Master’s degrees from Penn State and George Washington University, respectively, in Early Childhood Special Education and Public Health. In addition to being an agented and published author, Annika is a co-founder and co-host of That Desi Spark podcast (formerly called The Woke Desi), one of the largest independently run South Asian podcasts in the world. She has been invited to keynote speak at multiple events. She currently lives in New York City and works as a health communications manager by day, while juggling her writing and podcasting careers by night. She is a lover of endless conversations, college football, social justice, traveling, books, all things related to England, dancing, superhero movies, and coffee.

Madi Sinha: Madi Sinha is a writer and practicing physician who loves the nervous system, bookshops, tea with milk and snarky conversation (but not necessarily in that order). She lives in New Jersey with her husband and two children. The White Coat Diaries is her first novel.

Always Be My Duchess (Taming of the Dukes #1) (Paperback)

The author of The Right Swipe and Girl Gone Viral returns with a story about finding love in all the wrong inboxes...

"A sweet story of finding love where you least expected to. A romp through New York City with fresh immigrant eyes. Kiran and Nash's journey to learning to see themselves and others across boundaries and preconceived notions will warm your heart."—Sonali Dev, author of Recipe for Persuasion

At Least You Have Your Health (Paperback)

One of Shondaland's Best Books of April 2022!

Behind the chic veneer of a wellness clinic lies a dangerous secret, in this compelling women's fiction novel from the author of The White Coat Diaries.