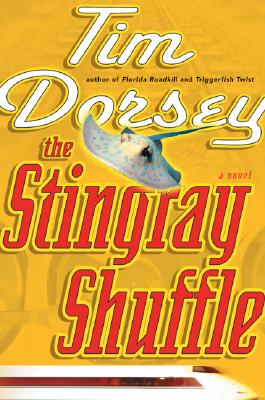 Yes, that encyclopedic history buff with boundless energy (but suspect impulse control) returns in his latest quest to make everyone appreciate all things Florida and still have time left for his one-man crime wave.

In this brand-new saga, The Stingray Shuffle, Serge takes on all comers: the Russian mob, the Jamaican mob, the cocaine cartels, and spoiled frat boys. But there must also be time for hobbies, and Serge's newest "interest" is trains: how they developed Florida, where the old historic cars are on display, when to book a trip on Amtrak and share his enthusiasm with the other passengers.

And for the faithful Tim Dorsey readers, here are some long-awaited answers. Ever since the publication of his first four delightfully depraved novels, Florida Roadkill, Hammerhead Ranch Motel, Orange Crush, and Triggerfish Twist audiences everywhere have clamored for details: Where's the briefcase with the $5 million? What happened to the loonies who somehow managed to survive the merry bloodbaths? How did Serge end up with amnesia? And can he meet the increasingly difficult challenge of maintaining his spot atop the wacko pile that is Florida?

The Stingray Shuffle answers all these and more as Serge and friends pinball between stops including Tampa, West Palm Beach, Fort Lauderdale, Cocoa Beach, and the Keys before setting their sights on New York City.

Which brings up a whole new set of questions: How will Serge survive outside his native state?

Will luck finally shine on Johnny Vegas, the Accidental Virgin?

What about the women's book club, whose members want more excitement in their lives and decide to hook up with a hyper but delightful tour guide from Florida? Does this mean romance is in the air? And will it involve props?

Find out by taking a ride on The Stingray Shuffle.