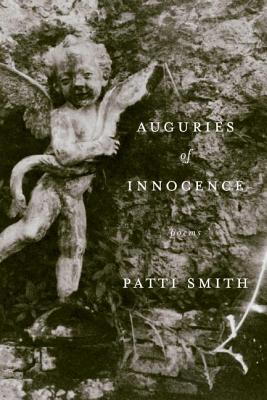 Auguries of Innocence is the first book of poetry from Patti Smith in more than a decade. It marks a major accomplishment from a poet and performer who has inscribed her vision of our world in powerful anthems, ballads, and lyrics. In this intimate and searing collection of poems, Smith joins in that great tradition of troubadours, journeymen, wordsmiths, and artists who respond to the world around them in fresh and original language. Her influences are eclectic and striking: Blake, Rimbaud, Picasso, Arbus, and Johnny Appleseed. Smith is an American original; her poems are oracles for our times.

Patti Smith is a writer, performer, and visual artist. She gained recognition in the 1970s for her revolutionary mergence of poetry and rock and was inducted into the Rock & Roll Hall of Fame in 2007. Her seminal album Horses, bearing Robert Mapplethorpe’s renowned photograph, hasbeen hailed as one of the top one hundred albums of all time. Her books include M Train, Witt, Babel, Woolgathering, The Coral Sea, and Auguries of Innocence.