My War Criminal: Personal Encounters with an Architect of Genocide (Hardcover) 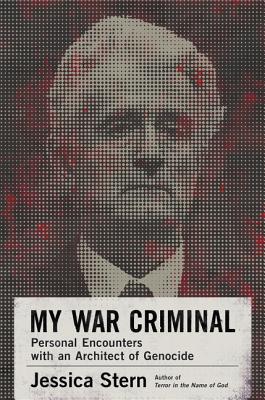 An investigation into the nature of violence, terror, and trauma through conversations with a notorious war criminal by Jessica Stern, one of the world's foremost experts on terrorism.

Between October 2014 and November 2016, global terrorism expert Jessica Stern held a series of conversations in a prison cell in The Hague with Radovan Karadzic, a Bosnian Serb former politician who had been indicted for genocide and other war crimes during the Bosnian War and who became an inspiration for white nationalists. Though Stern was used to interviewing terrorists in the field in an effort to understand their hidden motives, the conversations she had with Karadzic would profoundly alter her understanding of the mechanics of fear, the motivations of violence, and the psychology of those who perpetrate mass atrocities at a state level and who—like the terrorists she had previously studied—target noncombatants, in violation of ethical norms and international law.

How do leaders persuade ordinary people to kill their neighbors? What is the “ecosystem” that creates and nurtures genocidal leaders? Could anything about their personal histories, personalities, or exposure to historical trauma shed light on the formation of a war criminal’s identity in opposition to a targeted Other?

In My War Criminal, Jessica Stern brings to bear her incisive analysis and her own deeply considered reactions to her interactions with Karadzic, a brilliant and often shockingly charming psychiatrist and poet who spent twelve years in hiding, disguising himself as an energy healer, while also offering a deeply insightful and sometimes chilling account of the complex and even seductive powers of a magnetic leader—and what can happen when you spend many, many hours with that person.

Jessica Stern is a leading expert on terrorism and trauma. Stern is the coauthor with J. M. Berger of ISIS: The State of Terror and the author of Denial: A Memoir of Terror and Terror in the Name of God: Why Religious Militants Kill, selected by the New York Times as a notable book of the year. She has held fellowships awarded by the Guggenheim Foundation, the Erikson Institute, and the MacArthur Foundation. She was a Council on Foreign Relations International Affairs Fellow, a national fellow at Stanford University’s Hoover Institution, and a fellow of the World Economic Forum. Stern is a research professor at Boston University. Prior to teaching, she worked in government, serving on President Clinton’s National Security Council Staff and as an analyst at Lawrence Livermore National Laboratory.

&#8220A gripping look into the psychology behind racialized violence and how it’s carried out, MY WAR CRIMINAL is a powerful and timely book.  Jessica Stern draws a chilling portrait of Radovan Karadžic, giving us an eye-opening new context not only for the Bosnian War, but also of how fear can be harnessed and diverted to violent political ends.”
— Senator Chris Coons

“This book is a remarkable blend of biography, history, and psychiatry—only Jessica Stern could have written it.”
— Howard Gardner, author of Leading Minds

“Based on extraordinary access to a notorious Serbian leader, Jessica Stern has produced a remarkable study that both Illuminates the psychology of an individual war criminal and incisively analyzes the dynamic behind ethnic hatred and violence. Timely and compelling.”
— Michael Chertoff, former Secretary of Homeland Security

“My War Criminal is a riveting account full of edge-of-your-seat moments as Dr. Jessica Stern explores the boundaries of good and evil through hours of interviews with convicted mass murderer Radovan Karadžic. Complex emotions are unleashed on both sides as the interviewer circles a wily subject skilled at charm, obfuscation, misdirection, and intimidation—and Dr. Stern lays all of this out with extraordinary candor. Must reading for anyone interested in how a narcissistic leader can merge popular grievances and history to produce human tragedy on a massive scale.”
— John McLaughlin, Former Deputy Director and Acting Director of the CIA