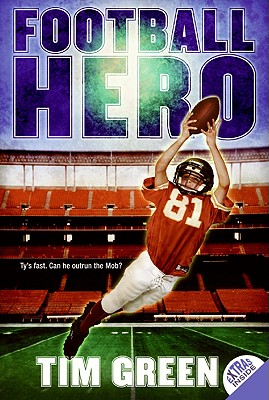 This is book number 2 in the Football Genius series.

Ever since Ty Lewis was orphaned and forced to stay with his legal guardian, Uncle Gus, he’s always wanted to prove how fast he is on a football field and be like his older brother, Thane "Tiger" Lewis, who's about to graduate from college—and is being courted by the NFL.

But instead of playing football, he’s scrubbing bathrooms after school for his uncle’s cleaning service. Thane is the only bright spot in Ty’s life. And now Uncle Gus wants to use Ty to get to him and obtain valuable insider information for a local mob boss called “Lucy” and his gambling ring.

Can Ty break free to save not only Thane’s football career, but his life?

“Even better than Football Genius...lots of fast-moving action and suspense...sure to be a hit.” — KLIATT starred review

“Instantly gripping...[keeps] the tension level high and the pages flipping furiously...sure to have a great many fans.” — Kirkus Reviews

“[T]he moral choices faced by the hero are heart-wrenchingly realistic, while the detailed description of the world surrounding the life of a professional football player will appeal to the many fans of the sport.” — Voice of Youth Advocates (VOYA)