The Genius Files #4: From Texas with Love (Paperback) 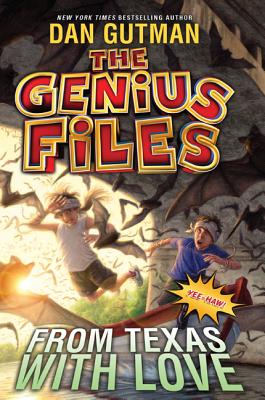 This is book number 4 in the Genius Files series.

The most exciting road trip in history continues! In this fourth book in the thrilling, New York Times bestselling adventure series, twelve-year-old twins Coke and Pepsi McDonald discover that everything really is bigger in Texas—including the danger!

After their explosive escape at Graceland, twins Coke and Pepsi are ready to resume their trip across America—only now in a convertible instead of the RV. They travel through Arkansas and Oklahoma, visiting weird-but-true tourist stops along the way, and finally end up in Texas, home of the Weird Capital of the Country, Austin. The twins' many enemies—the bowler dudes, Mrs. Higgins, and Dr. Warsaw—all swear that they're done chasing Coke and Pepsi for good. But when the twins start receiving more codes and ciphers from a mysterious robotic voice, they know someone's after them. They just have to figure out who before the mystery villain finds them first.

With Dan Gutman’s laugh-out-loud humor and featuring photos and weird-but-true American tourist destinations like the Museum of Weird, The Genius Files is a one-of-a-kind mix of geography and fun.

Don't miss the next action-packed book, The Genius Files #5: License to Thrill!

“A quirky look at Americana that will engage curious minds. Those looking for a fun and suspenseful read similar to those from Pseudonymous Bosch will not be disappointed.”
— ALA Booklist

“There is no shortage of humor or action. Gutman continues to do what he does best: entertain readers.”
— Publishers Weekly