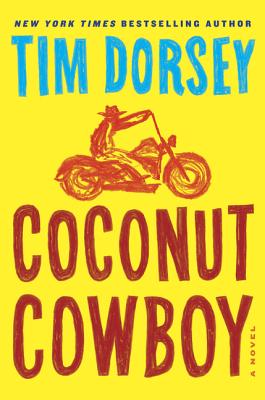 This is book number 20 in the Serge Storms series.

Channeling his inner Easy Rider, Serge Storms saddles up for his most epic, lethal, and hilarious road trip ever as he revvs off to find the lost American Dream . . . starting in the Florida Panhandle.

Setting a course for the Florida panhandle, Captain Serge—with Coleman literally riding shotgun—mounts his classic motorcycle and hits the highway in search of the real America: the apple-pie-eating, freedom-swilling moms and pops of Main Street USA.

But the America he finds in the rural burgs dotting the neck of the peninsula is a little bit different . . . and a whole lot weirder than anything Peter Fonda and Dennis Hopper encountered. In a state where criminal politicians are more common than gators, Serge and Coleman discover one particular speed-trap locale so aggressively inept at corruption that investigators are baffled where to start.

Expect nothing less than madness, mayhem, ingenious homicides, and mind-altering pharmaceuticals when Serge and Coleman’s path intersects with the Sunshine State’s hyper-dysfunctional rusticity.

Where’s Jack Nicholson when you need him?

“Amazing...one of his funniest and most deftly plotted yet.”
— Providence Journal

“It’s all fun in the Sunshine State. ... Nobody does wacky Florida like Dorsey.”
— Shelf Awareness

“Heartily recommended for readers who like their mayhem served up with belly laughs.”
— Booklist

“Always over the top, Dorsey has peaked with Coconut Cowboy, creating a tough act to follow for No. 20.”
— Florida Times-Union

“Dorsey keeps the body count low but the energy high as he prove again that enough is enough, but too much is plenty.”
— Kirkus Reviews

“Fast-paced. ... If you have not read any of Dorsey’s novels, join the fun.”
— St. Augustine Record

“The side-splittingest entry in the Serge A. Storms library.”
— FloridaBookReview.net