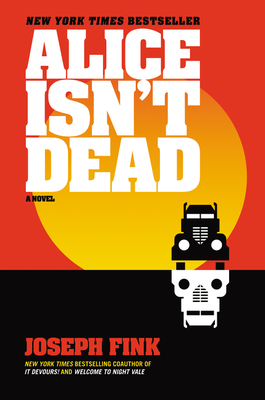 “Joseph Fink is my hero for making extreme anxiety a superpower and something from which a person can draw strength. Like the Welcome to Night Vale novels, Alice Isn’t Dead evinces a gentleness throughout the story, but as with Keisha, the protagonist, don’t mistake that for weakness. This novel is a road trip into the depths of human love even in the midst of experiencing inexplicable and weird horrors. It will linger with you long after you finish reading it.”
— Christine Havens, BookPeople, Austin, TX

From the bestselling co-author of It Devours! and Welcome to Night Vale comes a fast-paced thriller about a truck driver searching across America for the wife she had long assumed to be dead.

Keisha Taylor lived a quiet life with her wife, Alice, until the day that Alice disappeared. After months of searching, presuming she was dead, Keisha held a funeral, mourned, and gradually tried to get on with her life. But that was before Keisha started to see her wife, again and again, in the background of news reports from all over America. Alice isn’t dead, and she is showing up at every major tragedy and accident in the country.

Following a line of clues, Keisha takes a job as a long-haul truck driver and begins searching for Alice. She eventually stumbles on an otherworldly conflict being waged in the quiet corners of our nation’s highway system—uncovering a conspiracy that goes way beyond one missing woman.

Joseph Fink is the creator of the Welcome to Night Vale and Alice Isn't Dead podcasts, and the New York Times bestselling author of Welcome to Night Vale, It Devours!, and The Faceless Old Woman Who Secretly Lives in Your Home (all written with Jeffrey Cranor), and Alice Isn’t Dead. He is also the author of the middle-grade novel, The Halloween Moon. He and his wife, Meg Bashwiner, have written the memoir The First Ten Years. They live together in the Hudson River Valley.

“Bracingly candid and unabashedly epic, Alice Isn’t Dead is indeed a wild road trip that backs up Keisha’s hard-won philosophy that “the only way out is through.” — BookPage

“Alice Isn’t Dead is that rare example of supernatural fiction with both bite and heart. “ — San Francisco Chronicle

“Humdrum reality spins along under our wheels: life, love, work—until a kink in the road takes us deep into the land of Joseph Fink, who builds tarmac that isn’t quite of this world.” — Laurie R. King, New York Times bestselling author of Island of the Mad

“Ultimately an endorsement of everyday heroism and community, Alice Isn’t Dead resonates as a love story, a road trip novel and a campfire tale that taps into our most primal fears.” — Shelf Awareness