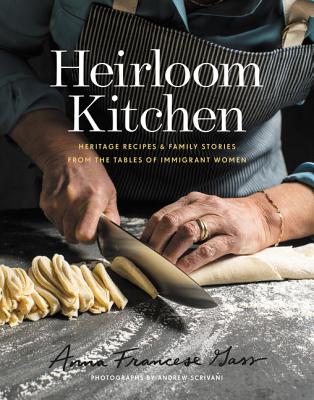 A gorgeous, full-color illustrated cookbook and personal cultural history, filled with 100 mouthwatering recipes from around the world, that celebrates the culinary traditions of strong, empowering immigrant women and the remarkable diversity that is American food.

Born in Italy, Anna Francese Gass came to the United States as a young child and grew up eating her mother’s Italian cooking. But when this professional cook realized she did not know how to make her family’s beloved meatballs—a recipe that existed only in her mother’s memory—Anna embarked on a project to record and preserve her mother’s recipes for generations to come.

In addition to her recipes, Anna’s mother shared stories from her life in Italy that her daughter had never heard before, fascinating tales that whetted Anna’s appetite to learn more. So, Anna began reaching out to her friends whose mothers were also immigrants, and soon she was cooking with dozens of women who were eager to share their unique memories and the foods of their homelands.

In Heirloom Kitchen, Anna brings together the stories and dishes of forty strong, exceptional women, all immigrants to the United States, whose heirloom recipes have helped shape the landscape of American food. Organized by region, the 100 tantalizing recipes include:

In addition to the dishes, these women share their recollections of coming to America—stories of hardship and happiness—that illuminate the power of food, and how cooking became a comfort and a respite in a new land for these women, as well as a tether to their native cultural identities.

Accented with 175 photographs, including food shots, old family photographs, and ephemera of the cooks’ first years in America—such as Soon’s recipe book pristinely handwritten in Korean or the measuring cup Anke tucked into her suitcase before leaving Germany—Heirloom Kitchen is a testament to female empowerment and strength, perseverance, diversity, and inclusivity. It is a warm and inspiring reminder that the story of immigrant food is, at its core, a story of America.

Anna Francese Gass is a graduate of the French Culinary Institute. After a stint in corporate sales, she traded the boardroom for the test kitchen, and has since worked for Whole Foods, Mad Hungry, and Martha Stewart Living Ominmedia. Currently, she is a regular contributing editor and recipe tester at Food52 and contributing writer for msn.com. She lives in Connecticut with her husband and three children. Follow her on Instagram @annafgass and website www.annasheirloomkitchen.com.

“Heirloom Kitchen is a stunning book that delves deeply into the rich cooking traditions of immigrant women and the immense legacy they have left on the American palate and food customs. The cooking of immigrants is the foundation of American food culture.”
— Jacques Pépin, chef, bestselling author, and television personality

“Food is culture. Heirloom Kitchen is a deliciously soulful look at the complexities of our American identity, and highlights one of the principle ways in which the past has always been female. Here is an inspiring look at a diverse group of a few of our founding females.”
— Anita Lo, author of Solo: A Modern Cookbook for a Party of One

“The from-scratch recipes of our immigrant families are the most important ones to preserve in our takeout, premade world. Anna shows us how to smell the sauce and hear the sizzles of our own unsung home-cook forebearers, while also sharing delicious traditional recipes from around the world.”
— Lucinda Scala Quinn, founder of Mad Hungry

“Anna has a wholehearted conviction that cooking and self-expression are one and the same. It made sense that she took on this ambitious celebration of immigrant women, paying tribute to their remarkable personal stories and best-loved dishes, as well as the inextricable nature of the two.”
— Merrill Stubbs and Amanda Hesser, cofounders of Food52