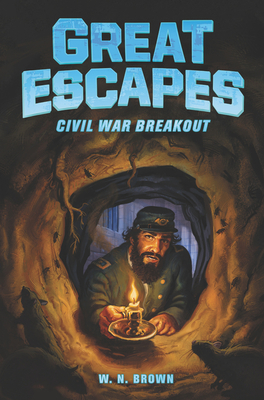 This is book number 3 in the Great Escapes series.

Are you ready for some of the most exciting, death-defying escape stories ever told? The third installment in the unputdownable Great Escapes series is here—perfect for fans of the I Survived series!

Civil War, 1863. Virginia. Union soldiers Colonel Thomas Rose and Major A. G. Hamilton were captured by the Confederate Army and taken to Libby Prison—one of the most horrific prisons ever run.

Few ever made it out of the overcrowded, vermin-infested prison alive.

But neither fear, nor darkness, nor squealing rats could keep Rose and Hamilton from freedom. They and other POWs would fight against the odds to attempt the largest prison escape in American history.

From reluctant reader to total bookworm, each book in this page-turning series—featuring fascinating bonus content and captivating illustrations—will leave you excited for the next adventure!

W. N. Brown is a freelance writer who has written for Time-Life Books’ Mysteries of the Unknown and Mysteries of the Criminal Mind and written articles on historical artifacts, scientific discoveries, and popular culture. Originally from Texas, he currently lives in New York City.

James Bernardin is a versatile and prolific illustrator of many acclaimed books for children. He has illustrated Laura Numeroff's Would I Trade My Parents?, Eve Bunting's Too Many Monsters, and Candy Chand's The Twelve Prayers of Christmas. He has also created artwork for numerous book covers, including Mary Pope Osborne's Tales from the Odyssey series.

James lives on Bainbridge Island in Washington State with his wife, Lisa, and two sons, Wyeth and Bryson.