Great Escapes #6: Across the Minefields (Paperback) 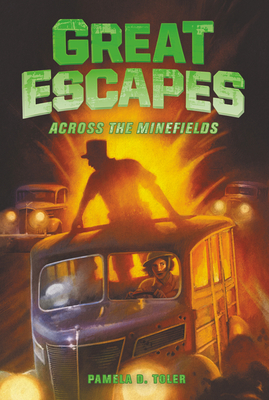 Great Escapes #6: Across the Minefields (Paperback)

Are you ready for some of the most exciting, death-defying escape stories ever told? The sixth installment in the Great Escapes series is here—perfect for fans of the I Survived series!

June, 1942—Libya. Free French Officer Susan Travers was one of the few women on the frontlines in Africa during World War Two. After the Germans surrounded the military camp of Bir Hakeim, a shocking order was issued. The French troops were going to break out in the middle of the night—crossing through dangerous minefields and enemy territory—to reach their British allies. And Officer Travers would be leading the charge.

With the lives of thousands of military men at risk, stakes were high. But Officer Travers didn’t face rejection and break gender barriers to back down now. Her country needed her to fight. And win.

Pamela D. Toler is the author of Across the Minefields, the forthcoming sixth book in the Great Escapes series.

James Bernardin is a versatile and prolific illustrator of many acclaimed books for children. He has illustrated Laura Numeroff's Would I Trade My Parents?, Eve Bunting's Too Many Monsters, and Candy Chand's The Twelve Prayers of Christmas. He has also created artwork for numerous book covers, including Mary Pope Osborne's Tales from the Odyssey series.

James lives on Bainbridge Island in Washington State with his wife, Lisa, and two sons, Wyeth and Bryson.

W. N. Brown is a freelance writer who has written for Time-Life Books’ Mysteries of the Unknown and Mysteries of the Criminal Mind and written articles on historical artifacts, scientific discoveries, and popular culture. Originally from Texas, he currently lives in New York City.