My Weirder-est School #10: Mr. Ott Is a Crackpot! (Paperback) 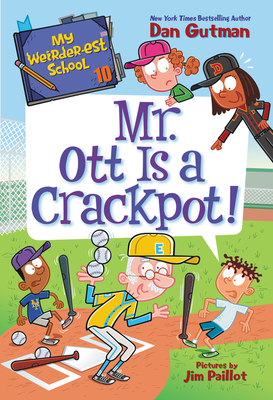 My Weirder-est School #10: Mr. Ott Is a Crackpot! (Paperback)

This is book number 10 in the My Weirder-est School series.

With more than 30 million books sold, the My Weird School series really gets kids reading! This tenth book in the My Weirder-est School arc knocks it out of the park as A.J. and his friends learn how to play softball.

Batter up! A.J.’s class is going head-to-head against Dirk School in a charity softball game. The losing team must clean one of the toilets in the winning school with a toothbrush!

Retired baseball pro Mr. Ott is here to lead Ella Mentry School to victory. But will his weird coaching tactics be a home run, or a swing and a miss?

Perfect for reluctant readers and all kids hungry for funny school stories, Dan Gutman’s hugely popular My Weird School chapter book series has something for everyone. Don’t miss the hilarious adventures of A.J. and the gang!

Jim Paillot lives in Arizona (another weird place) with his weird wife and two weird children. Isn’t that weird? You can visit him on his weird website at www.jimpaillot.com