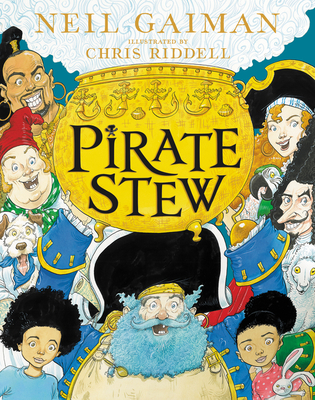 Long John has a whole crew of wild pirates in tow, and—for one boy and his sister—he's about to transform a perfectly ordinary evening into a riotous adventure beneath a pirate moon. It's time to make some PIRATE STEW.

Marvelously silly and gloriously entertaining, this tale of pirates, flying ships, doughnut feasts and some rather magical stew is perfect for all pirates, both young and old.

With a deliciously rhyming text from master storyteller Neil Gaiman and spellbinding illustrations by the supremely talented Chris Riddell, this is the picture book of the year!

Neil Gaiman is a #1 New York Times bestselling author of books for children and adults whose award-winning titles include Norse Mythology, American Gods, The Graveyard Book, Good Omens (with Terry Pratchett), Coraline, and The Sandman graphic novels. Neil Gaiman is a Goodwill Ambassador for UNHCR and Professor in the Arts at Bard College.

Chris Riddell is an acclaimed British artist who lives in Brighton, England. He has written and illustrated many books of his own, including Ottoline and the Yellow Cat and Ottoline Goes to School, and has illustrated, for Bloomsbury UK, The Graveyard Book; Coraline; and Fortunately, the Milk; as well as The Sleeper and the Spindle.

"What could possibly go awry? With consummately inventive Newbery Medalist Gaiman at the helm, nothing short of boatloads... [A] delightful yarn."  — Publishers Weekly

"This is a lively pirate outing for any fan of nautical or just plain silly humor." — Bulletin of the Center for Children’s Books