Neon Girls: A Stripper's Education in Protest and Power (Paperback) 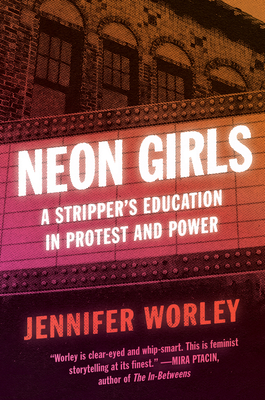 "Galvanizing and urgent....a slice of queer urban history and a necessary rethinking of sex work as a site of collective labor struggle."  –National Public Radio

A riveting true story of a young woman’s days stripping in grunge-era San Francisco where a radical group of dancers banded together to unionize and run the club on their own terms.

When graduate student Jenny Worley needed a fast way to earn more money, she found herself at the door of the Lusty Lady Theater in San Francisco, auditioning on a stage surrounded by mirrors, in platform heels, and not much else. So began Jenny’s career as a stripper strutting the peepshow stage as her alter-ego “Polly” alongside women called Octopussy and Amnesia. But this wasn’t your run-of-the-mill strip club—it was a peepshow populated by free-thinking women who talked feminist theory and swapped radical zines like lipstick.

As management’s discriminatory practices and the rise of hidden cameras stir up tension among the dancers, Jenny rallies them to demand change. Together, they organize the first strippers’ union in the world and risk it all to take over the club and run it as a co-operative. Refusing to be treated as sex objects or disposable labor, they become instead the rulers of their kingdom. Jenny’s elation over the Lusty Lady’s revolution is tempered by her evolving understanding of the toll dancing has taken on her. When she finally hangs up her heels for good to finish her Ph.D., neither Jenny nor San Francisco are the same—but she and the cadre of wild, beautiful, brave women who run the Lusty Lady come out on top despite it all.

A first-hand account as only an insider could tell it, Neon Girls paints a vivid picture of a bygone San Francisco and a fiercely feminist world within the sex industry, asking sharp questions about what keeps women from fighting for their rights, who benefits from capitalizing on desire, and how we can change entrenched systems of power.

Jennifer Worley is a professor of English at City College of San Francisco and President of the faculty union, AFT 2121. Her film Sex On Wheels, documents the history of San Francisco's sex industry and sex worker activism and has played at film festivals and universities worldwide. Her writing has appeared in Bitch, Captive Genders, Invisible Suburbs, The Queerist, and PRI's Outright Radio.

"A piercing examination of gender politics and a gritty insider’s account of union organizing. Worley adroitly captures the devastating dichotomy of feminist power running headlong into the realities of work built around the whims of men. A vivid and erudite exploration of class struggle and gender identity."
— Kirkus Reviews (starred review)

"I tore through this with a bedtime-be-damned voracity normally reserved for mysteries and thrillers, and though I already knew the broad-strokes version of the story, I was nonetheless completely enthralled by this firsthand account. Neon Girls chronicles Worley's journey from fledgling stripper to full-fledged labor activist; the creation of the Exotic Dancers Union; and the transformation of San Francisco's legendary Lusty Lady into a unionized, worker-owned co-op peep show. An inspiring, nostalgic, feminist, and unequivocally badass tale, with moments of solidarity that will trigger many happy tears, this book is a gem."
— Powell's Books (Portland, Oregon) STAFF PICK

"Worley skillfully captures a slice of a San Francisco that no longer exists through a fiercely feminist lens. A fast-paced, engaging book that readers with an interest in feminist thought, memoirs, and labor activism will enjoy."
— Library Journal (starred review)

“I could not put this book down. Worley is clear-eyed and whip smart. Neon Girls flipped my understanding of the sex industry and helped my brain and empathy evolve. I love this book and am recommending it to everyone I know—this is feminist storytelling at its finest.”
— Mira Ptacin, author of The In-Betweens

“Neon Girls is a fantastic in-depth peek into the peep show business. Worley’s firsthand account offers a view inside a business rarely seen, exposing its inner workings from hiring practices to enforced stage etiquette. Undressing readers of their preconceptions about stripping and strippers, Worley reveals that in this female-centered workplace she could feel both free, safe, and powerful while also acknowledging the toll that comes from making oneself vulnerable and available daily to others as an object of desire and fantasy. [An] inspirational story of female solidarity and empowerment.”
— Alexa Albert, author of Brothel: Mustang Ranch and Its Women