Nora: A Love Story of Nora and James Joyce (Paperback) 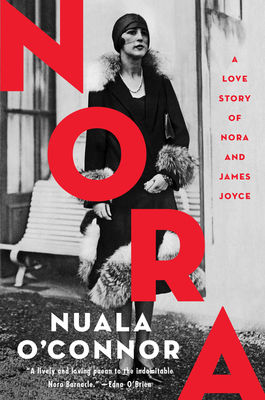 Nora: A Love Story of Nora and James Joyce (Paperback)

Acclaimed Irish novelist Nuala O’Connor’s bold reimagining of the life of James Joyce’s wife, muse, and the model for Molly Bloom in Ulysses is a “lively and loving paean to the indomitable Nora Barnacle” (Edna O’Brien).

Dublin, 1904. Nora Joseph Barnacle is a twenty-year-old from Galway working as a maid at Finn’s Hotel. She enjoys the liveliness of her adopted city and on June 16—Bloomsday—her life is changed when she meets Dubliner James Joyce, a fateful encounter that turns into a lifelong love. Despite his hesitation to marry, Nora follows Joyce in pursuit of a life beyond Ireland, and they surround themselves with a buoyant group of friends that grows to include Samuel Beckett, Peggy Guggenheim, and Sylvia Beach.

But as their life unfolds, Nora finds herself in conflict between their intense desire for each other and the constant anxiety of living in poverty throughout Europe. She desperately wants literary success for Jim, believing in his singular gift and knowing that he thrives on being the toast of the town, and it eventually provides her with a security long lacking in her life and his work. So even when Jim writes, drinks, and gambles his way to literary acclaim, Nora provides unflinching support and inspiration, but at a cost to her own happiness and that of their children.

With gorgeous and emotionally resonant prose, Nora is a heartfelt portrayal of love, ambition, and the quiet power of an ordinary woman who was, in fact, extraordinary.

Nuala O’Connor was born in Dublin, Ireland, in 1970. A graduate of Trinity College Dublin, she is a novelist and short story writer, and lives in County Galway with her husband and three children. Nuala has won many prizes for her short fiction including the Short Story Prize in the UK and Ireland’s Francis MacManus Award. She is editor at flash e-zine Splonk.

“[A] poignant, comprehensive portrait of Nora Barnacle as a young woman, mother, and literary inspiration for the Molly Bloom character in Ulysses. . . . Narrated in Nora’s robust voice and carried by details saturated in filth  . . . . O’Connor’s admirable accomplishment adds to the abundant Joyceana with a moving examination of an unforgettable family.” — Publishers Weekly

“This is a woman’s story of craving female friendship, tending children, and supporting a wayward wanderer while always loving—and being loved by—him.” — Kirkus Reviews

"A lively and loving paean to the indomitable Nora Barnacle." — Edna O'Brien

"An exceptional novel by one of the most brilliant contemporary Irish writers, this is a story of love in all its many seasons, from ardent sexuality to companionable tenderness, through strength, challenge, and courage. Nuala O'Connor has brought to vivid life a woman about whom every literature lover has surely wondered and has done so with immense skill and daring." — Joseph O'Connor, author of Star of the Sea and Shadowplay

“This fictional Nora is entirely convincing in her raw sensuality, her stubborn determination, her powerful sense of grievance and her inability to stop loving a deeply erratic, wildly manipulative yet enormously talented man.” — New York Times Book Review

"Lively portrait . . . O'Connor has a musical ear for language." — Vogue

"An exhaustive and often wildly engaging fictionalized biography, the full story of the Galway gal who traipsed after James as he wrote, drank, and intermittently worked his way across Europe is a tale of its own."
— Boston Globe

“The Nora that leaps of these pages is at once muse, temptress, earth mother and warrior queen all rolled into one glorious package . . . O’Connor positions her protagonist centre-stage to charm readers with her winning blend of native pragmatism and vernacular wit.” — Sunday Times (London)

"A truly impressive work of biographical fiction, Nuala O’Connor pens a powerful and incisive account of the life of Nora Joyce, who despite being remembered as 'Irish literature’s greatest muse' was really a far more complex, commanding, and intriguing individual than her lasting reputation suggests." — San Francisco Book Review