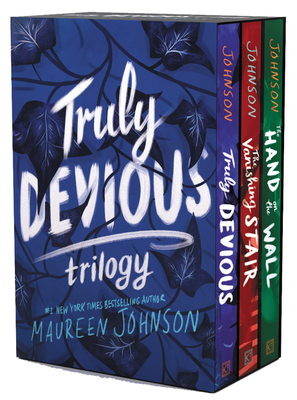 Bestselling author Maureen Johnson’s Truly Devious trilogy is a hilarious and inspiring whodunit that weaves together the story of a cold case from 1936 and the story of teen sleuth Stevie Bell in the present. The Truly Devious box set includes all three paperbacks in the series and is perfect for gift-giving and binge reading.

The Truly Devious case—an unsolved kidnapping and triple murder that rocked Ellingham Academy in 1936—has consumed Stevie for years. It’s the very reason she came to the Academy. But after she arrives, more students turn up dead. Teen detective Stevie is on the case until she solves every mysterious death—from the past and the present.

Praise for The Vanishing Stair:

“Take it from the world’s most impatient reader: If the Truly Devious series is basically one long mystery book, The Vanishing Stair is middle part so enjoyable you won’t even want to skip to the end.” —Entertainment Weekly

Praise for The Hand on the Wall:

Maureen Johnson is the bestselling author of several novels, including 13 Little Blue Envelopes, the Truly Devious series, the Suite Scarlett series, and the Shades of London series. She has also written collaborative works such as Let It Snow with John Green and Lauren Myracle and The Bane Chronicles with Cassandra Clare and Sarah Rees Brennan. Maureen lives in New York and online on Twitter @maureenjohnson or at www.maureenjohnsonbooks.com.

“Jumping between past and present, Johnson’s novel is deliciously atmospheric, with a sprawling cast of complex suspects/potential victims, surprising twists, and a dash of romance. As in her Shades of London books, Johnson remains a master at combining jittery tension with sharp, laugh-out-loud observations.” — Publishers Weekly (starred review)

“Remember the first time reading Harry Potter and knowing it was something special? There’s that same sense of magic in the introduction of teen Sherlock-in-training Stevie Bell. Parallel mysteries unfold with cleverly written dialogue, page-turning brilliance and a young sleuth just as captivating as Hercule Poirot.”  — USA Today (four stars)

“A suspenseful, attention-grabbing mystery with no clear solution. The versatile Johnson is no stranger to suspense, and this twisty thriller will leave plenty of readers anxious for more.”  — Booklist

Praise for THE VANISHING STAIR “In this second . . . installment, Johnson gives and she takes away: a few major mysteries are satisfying solved, but other long-standing riddles remain tantalizingly indecipherable, and several new ones come into play by the enigmatic end. Readers, hang tight: there’s one more round to come, and if the signs are right, it’ll be to die for.”
— Booklist

"Ramps up the intrigue. Throughout this volume, Johnson's compelling would-be Sherlock proves to be as bad at personal relationships as she is adept at solving mysteries. Teen angst soars as Johnson delightfully conjures up more nefarious deeds from the mountain mist." — Kirkus Reviews (starred review)

“Take it from the world’s most impatient reader: If the Truly Devious series is basically one long mystery book, The Vanishing Stair is a middle part so enjoyable you won’t even want to skip to the end.” — Entertainment Weekly

“Waiting for the next installment of Maureen Johnson’s Agatha Christie-Sherlock Holmes-classic mystery homage series was torture, but The Vanishing Stair is oh so worth it.”  — Bustle

Praise for THE HAND ON THE WALL "The final, riveting chapter of the Truly Devious murder series. Throughout this intricately woven, fast-paced whodunit, Johnson demonstrates how proximity to wealth and power can mold and bend one's behavior, whether with good or—here largely—devious intent. A richly satisfying, Poirot-like ending for Johnson's inspired and inspiring teen sleuth."
— Kirkus Reviews (starred review)

"In this hotly anticipated trilogy finale, Johnson pulls out all the stops, filling the thrillingly nimble narrative with classic mystery conventions. A striking foray into an examination of what mysteries can ever truly be solved, and a satisfying send-off for a series that will be missed."  — Booklist

"This will be essential reading for the many fans of the first two books. This trilogy ender is fun, satisfying, and a genuine treat for teens and adult mystery fans."  — School Library Journal