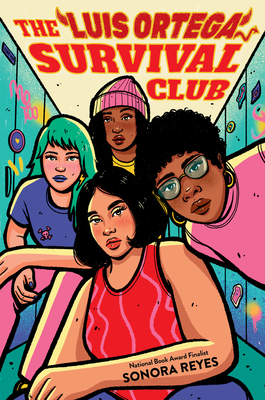 From the bestselling author of the National Book Award Finalist The Lesbiana’s Guide to Catholic School comes a revenge story told with nuance, heart, and the possibility of healing. An ideal next read for fans of Laurie Halse Anderson.

Ariana Ruiz wants to be noticed. But as an autistic girl who never talks, she goes largely ignored by her peers—despite her bold fashion choices. So when cute, popular Luis starts to pay attention to her, Ari finally feels seen.

Luis’s attention soon turns to something more, and they have sex at a party—while Ari didn’t say no, she definitely didn’t say yes. Before she has a chance to process what happened and decide if she even has the right to be mad at Luis, the rumor mill begins churning—thanks, she’s sure, to Luis’s ex-girlfriend, Shawni. Boys at school now see Ari as an easy target, someone who won’t say no.

Then Ari finds a mysterious note in her locker that eventually leads her to a group of students determined to expose Luis for the predator he is. To her surprise, she finds genuine friendship among the group, including her growing feelings for the very last girl she expected to fall for. But in order to take Luis down, she’ll have to come to terms with the truth of what he did to her that night—and risk everything to see justice done.

Sonora Reyes is a queer second-generation immigrant who attended a Catholic high school. They write fiction full of queer and Latinx characters in a variety of genres. Sonora is also the creator and host of #QPOCChat, a monthly community-building Twitter chat for queer writers of color. They currently live in Arizona, in a multigenerational family home with a small pack of dogs who run the place.

“The Luis Ortega Survival Club impressively and realistically explores trauma and pain alongside joy and love. Refreshingly sincere and ultimately hopeful, this book oozes intentional care for its characters and readers.” — Racquel Marie, author of Ophelia After All