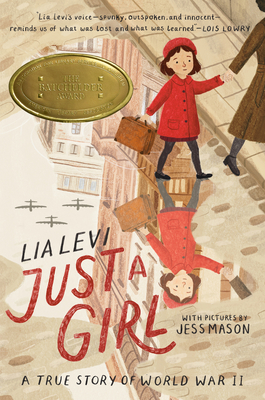 In this award-winning memoir translated from Italian to English, a Jewish girl grows up during a difficult time of racial discrimination and war, and discovers light in unexpected places. This classic, powerful story from Lia Levi is adapted for young readers, with beautiful black-and-white illustrations, a family photo album, and a powerful author’s note to readers.

1938, Italy. Six-year-old Lia loves to build sandcastles at the beach and her biggest problem is her shyness and quiet, birdlike voice—until prime minister Mussolini joins forces with Hitler in World War II, and everything changes.

Now there are laws saying Jewish children can’t go to school, Jews can’t work, or go on vacation. It’s difficult for Lia to understand why this is happening to her family. When her father loses his job, they must give up their home and move from city to city.

As war comes closer, it becomes too dangerous to stay together, and Lia and her sisters are sent to hide at a convent. Will she ever be “just a girl” again?

The memoir is full of poignant moments of friendship and loss, dreaded tests at school, told in Lia's captivating voice, as she grows into a young teen. Just a Girl is an important addition to the WWII Jewish canon.

Lia Levi was born in Pisa, Italy in 1931. She is the author of several works of fiction largely dedicated to Jewish themes, and is well known for her award-winning memoir, Just a Girl. She studied philosophy after World War II, and became a successful journalist and director of the Jewish monthly magazine, Shalom. She won the Premio Strega Giovani award in 2018 and the Elsa Morante prize in 1994.

Jess Mason is drawn to a variety of themes in her work. She is inspired by history, folk art, medieval manuscripts, Renaissance maps, and the sleeping positions of her cat. If she had a superpower, it would be time travel. As that’s not possible, transforming memories, stories, and experiences into illustration is the next best thing. She found it both fascinating and inspiring to venture into Lia’s world and view World War II through the lens of a child living through it. Visit her at www.jessmasonillustration.com.

“Lia Levi adds her girlhood voice—so spunky, outspoken, and innocent—to the great children’s choir of Holocaust narratives. These voices, fewer each year, remind us of what was lost and what was learned.” –Lois Lowry, author of Number the Stars  —

"Lia’s young voice is perceptive and heartbreakingly vulnerable as she recounts her steadfast, even cheerful, acceptance of the changes in her life amid the insanity around her. A remarkable, powerful young readers’ adaptation of an award-winning World War II memoir." — Kirkus Reviews (starred review)

"A quiet Jewish Italian child uprooted by war proves resilient in this endearing illustrated memoir...This account is neither rose colored nor naive, but it also doesn't focus unduly on the pain of Lia's Holocaust experience. [An] excellent step beyond Peter Sís’ Nicky and Vera (2021) for sensitive readers and gives voice to an underrepresented nationality among Holocaust survivor stories." — Booklist (starred review)

“The quick, deft storytelling is that of a gifted, experienced narrator...Lia’s impressions of her different schools, new friendships, and the conditions war brings about speak to children’s interests." — Horn Book Magazine

“Heartbreaking and sweet… Levi’s story is perfect for young children who want to learn more about the Holocaust, but aren’t ready for the more horrific details. An excellent addition to elementary memoir and World War II collections.” — School Library Journal

“Though this story will sound common to many readers who have familiarity with World War II, Levi makes her memoir easily comprehensible to a younger age group, handling topics such as financial troubles and hunger with particular accessibility.” — Bulletin of the Center for Children’s Books