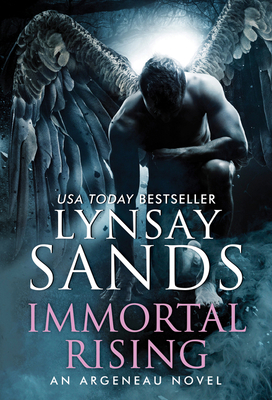 This is book number 34 in the An Argeneau Novel series.

The Argeneaus are back! Filled with love, passion, and adventure, New York Times bestselling author Lynsay Sands returns with another sexy romance about everyone's favorite immortals.

Stephanie McGill was attacked and turned when she was just a teenager. Worse, her abilities are unlike any other immortal. Now 13 years later, with the help of her adopted Argeneau family, Steph has carved out a new – if not lonely – life for herself. Until a new neighbor arrives…

Thorne is also one-of-a-kind. The result of a genetic experiment, he’s not an immortal, but he’s not mortal either. He’s looking for a place to hide, to get some peace and quiet so he can figure things out, and Stephanie’s sanctuary is perfect. In fact, Stephanie is perfect. For the first time, Thorne is free to be himself and he’s falling for her.

But if they’re going to have a future together, they’ll first need to deal with their past…because the mad scientist who created Thorne is now after Stephanie.

Lynsay Sands is the nationally bestselling author of the Argeneau/Rogue Hunter vampire series, as well as numerous historicals and anthologies. She’s been writing since grade school and considers herself incredibly lucky to be able to make a career out of it. Her hope is that readers can get away from their everyday stress through her stories, and if there are occasional uncontrollable fits of laughter, that’s just a big bonus. Please visit her on the web at www.lynsaysands.net.

“Meant to Be Immortal has a brainy vamp hero, a tough heroine, and a few curveballs.” — Fresh Fiction

“With all the quirkiness, humor, attraction, and beloved Argeneau characters I crave from this series, Meant to Be Immortal was an entertaining new read by Lynsay Sands.”  — Harlequin Junkie

“Her trademark humor and genuine characters...keep her series fresh and her readers hooked.” — Publishers Weekly on Immortal Nights

“Sands delivers a rip-roaring adventure with plenty of steamy interludes in a story that should make fans of even the most virulent anti-vampire readers. It’s hard to resist her witty dialogue, off-the-wall scenarios, sexy moments, and tongue-in-cheek sense of humor, all of which combine for a deliciously fun romp in this absolutely bonkers read.” — Entertainment Weekly on Vampires Like It Hot