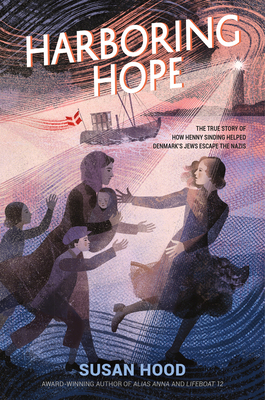 The inspirational true story of how twenty-two-year-old Henny Sinding courageously helped smuggle hundreds of Jewish families in occupied Denmark to safety in Sweden during the Holocaust. A middle grade nonfiction novel-in-verse by award-winning author Susan Hood.

It wouldn’t be easy, but they had to try.

It was their only chance to survive.

In 1943, Henny Sinding, only twenty-two years old, and the crew of Gerda lll, a lighthouse supply boat, risked everything to smuggle their Jewish compatriots across the Øresund strait to safety in Sweden during World War ll. In Henny’s words, “It was the right thing to do so we did it. Simple as that.” But what happened when their operation’s cover was blown and it was Henny’s turn to escape?

This incredible true story in-verse about courage, community, humanity, and hope is perfect for fans of Lifeboat 12, Alias Anna, and Alan Gratz.

Susan Hood is the award-winning author of many books for young readers, including Alias Anna, Lifeboat 12, Ada’s Violin, Brothers in Arms, The Last Straw: Kids vs. Plastics, Shaking Things Up, and Titan and the Wild Boars. She is the recipient of an E. B. White Read-Aloud Picture Book Honor, the Christopher Award, the Américas Award for Children’s and Young Adult Literature, the Golden Kite Award, and the Bank Street Flora Stieglitz Straus Award, given annually for “a distinguished work of nonfiction.” Visit her at susanhoodbooks.com.

Harboring Hope is a masterful telling of the heroic escape of the Danish Jews. Through thoughtful and beautiful verse, Susan Hood has captured the intricacies of this special story for future generations.  — president and CEO of the Museum of Jewish Heritage—A Living Memorial to the Holocaust