Taste of Salt: A Story of Modern Haiti (Paperback) 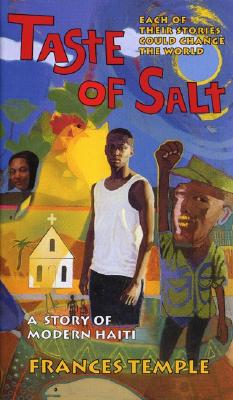 Taste of Salt: A Story of Modern Haiti (Paperback)

Every Life
Makes a Story

Djo has a story: Once he was one of "Titid's boys," a vital member of Father Jean-Bertrand Aristide's election team, fighting to overthrow military dictatorship in Haiti. Now he is barely alive, the victim of a political firebombing.

Jeremie has a story: Convent-educated Jeremie can climb out of the slums of Port-au-Prince. But she is torn between her mother's hopes and her own wishes for herself ... and for Haiti.

Father Jean-Bertrand Aristide has a story: A dream of a new Haiti, one in which every person would have a decent life ... a house with a roof ... clean water to drink ... a good plate of rice and beans every day ... a field to work in.

At Aristide's request, Djo tells his story to Jeremie -- for Titid believes in the power of all of their stories to make change. As Jeremie listens to Djo, and to her own heart, she knows that they will begin a new story, one that is all their own, together.

Frances Temple grew up in Virginia, France, and Vietnam. About her third book she wrote, "The Ramsay Scallop is about our need for adventure and motion, for throwing in with strangers, trusting and listening. The story began to take form in northern Spain along pilgrim trails; was fed by histories, stories, letters, by the testimony of a fourteenthcentury shepherd, by the thoughts of today's pilgrims. Concerns echo across years-clean water, good talk, risks welcomed, the search for a peaceful heart. Traveling in Elenor's shoes, I found out how strongly the tradition of pilgrimage continues."Ms. Temple received many honors during her distinguished career. Her other critically acclaimed books for young people include: FranceTaste of Salt A Story of Modern Haiti, winner of the 1993 Jane Addams Children's Book Award; Grab hands and Run, cited by SchoolLibrary journal as one of the Best Books of 1993; and Tonight, by Sea another novel set in Haiti.