Journey through Genius: The Great Theorems of Mathematics (Paperback) 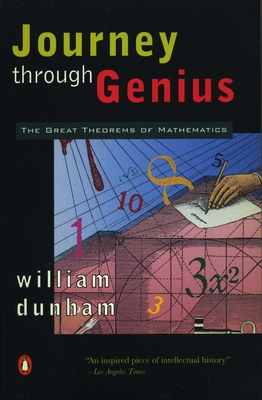 Journey through Genius: The Great Theorems of Mathematics (Paperback)

Dunham places each theorem within its historical context and explores the very human and often turbulent life of the creator — from Archimedes, the absentminded theoretician whose absorption in his work often precluded eating or bathing, to Gerolamo Cardano, the sixteenth-century mathematician whose accomplishments flourished despite a bizarre array of misadventures, to the paranoid genius of modern times, Georg Cantor. He also provides step-by-step proofs for the theorems, each easily accessible to readers with no more than a knowledge of high school mathematics. A rare combination of the historical, biographical, and mathematical, Journey Through Genius is a fascinating introduction to a neglected field of human creativity.

“It is mathematics presented as a series of works of art; a fascinating lingering over individual examples of ingenuity and insight. It is mathematics by lightning flash.” —Isaac Asimov
William Dunham is a Phi Beta Kappa graduate of the University of Pittsburgh. After receiving his Ph.D. from the Ohio State University in 1974, he joined the mathematics faculty at Hanover College in Indiana. He has directed a summer seminar funded by the National Endowment for the Humanities on the topic of "The Great Theorems of Mathematics in Historical Context."
"An inspired piece of intellectual history."— Los Angeles Times

“Dunham deftly guides the reader through the verbal and logical intricacies of major mathematical questions, conveying a splendid sense of how the greatest mathematicians from ancient to modern times presented their arguments.”—Ivars Peterson, author of The Mathematical Tourist