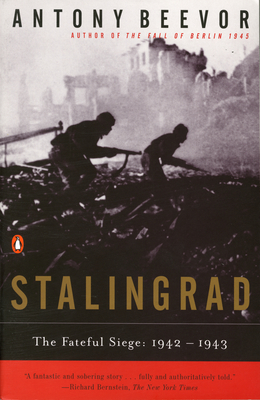 
Currently Unavailable
The Battle of Stalingrad was not only the psychological turning point of World War II: it also changed the face of modern warfare. From Antony Beevor, the internationally bestselling author of D-Day and The Battle of Arnhem.

In August 1942, Hitler's huge Sixth Army reached the city that bore Stalin's name. In the five-month siege that followed, the Russians fought to hold Stalingrad at any cost; then, in an astonishing reversal, encircled and trapped their Nazi enemy. This battle for the ruins of a city cost more than a million lives. Stalingrad conveys the experience of soldiers on both sides, fighting in inhuman conditions, and of civilians trapped on an urban battlefield. Antony Beevor has itnerviewed survivors and discovered completely new material in a wide range of German and Soviet archives, including prisoner interrogations and reports of desertions and executions. As a story of cruelty, courage, and human suffering, Stalingrad is unprecedented and unforgettable.

Historians and reviewers worldwide have hailed Antony Beevor's magisterial Stalingrad as the definitive account of World War II's most harrowing battle.
Antony Beevor was educated at Winchester and Sandhurst. A regular officer in the 11th Hussars, he served in Germany and England. He has published several novels, and his works of nonfiction include The Spanish Civil War; Crete: The Battle and the Resistance, which won the 1993 Runciman Award; Stalingrad: The Fateful Siege: 1942—1943; and Berlin: The Downfall, 1945. With his wife, Artemis Cooper, he wrote Paris: After the Liberation: 1944—1949. His book Stalingrad was awarded the Samuel Johnson Prize for Non-Fiction, the Wolfson History Prize, and the Hawthornden Prize in 1999.
"A fantastic and sobering story...fully and authoritatively told."—The New York Times

"Stalingrad's heart-piercing tragedy needed a chronicler with acute insight into human nature as well as the forces of history. Antony Beevor is that historian."—The Wall Street Journal

"Easily the most complete and objective picture of the battle's scale and ferocity that American readers have ever read."—Dallas Morning News

"Magnificent...Certainly the best narrative of the battle yet to appear and...not likely to be surpassed in our time."—John Keegan