On Love and Barley: Haiku of Basho (Paperback) 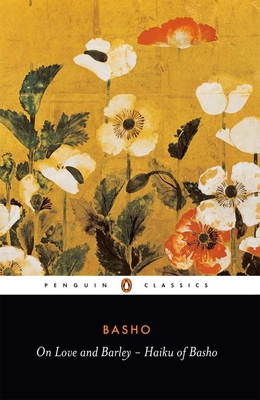 On Love and Barley: Haiku of Basho (Paperback)


Ships to Our Store in 1-5 Days
Basho, one of the greatest of Japanese poets and the master of haiku, was also a Buddhist monk and a life-long traveller. His poems combine 'karumi', or lightness of touch, with the Zen ideal of oneness with creation. Each poem evokes the natural world - the cherry blossom, the leaping frog, the summer moon or the winter snow - suggesting the smallness of human life in comparison to the vastness and drama of nature. Basho himself enjoyed solitude and a life free from possessions, and his haiku are the work of an observant eye and a meditative mind, uncluttered by materialism and alive to the beauty of the world around him.

For more than seventy years, Penguin has been the leading publisher of classic literature in the English-speaking world. With more than 1,700 titles, Penguin Classics represents a global bookshelf of the best works throughout history and across genres and disciplines. Readers trust the series to provide authoritative texts enhanced by introductions and notes by distinguished scholars and contemporary authors, as well as up-to-date translations by award-winning translators.
Basho was born near Kyoto in 1644. A poet and diarist, he spent his youth as companion to the son of the local lord, and with him studied the writing of poetry. In 1667 he moved to Edo (now Tokyo) and continued to write verse. Eventually, he became a recluse. His writings are strongly influenced by the Zen sect of Buddhism. Lucien Stryk is a well-known translator.