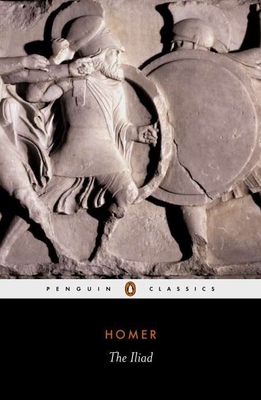 
Ships to Our Store in 1-5 Days
E.V. Rieu’s beloved translation of the great war epic of Western literature, revised and updated by D. C. H. Rieu

One of the foremost achievements in Western literature, Homer's Iliad tells the story of the darkest episode of the Trojan War. At its center is Achilles, the greatest warrior-champion of the Greeks, and his conflict with his leader Agamemnon. Interwoven in the tragic sequence of events are powerfully moving descriptions of the ebb and flow of battle, the besieged city of Ilium, the feud between the gods, and the fate of mortals.

For this Penguin Classics edition, classicist D. C. H. Rieu has revised the work of his father, E. V. Rieu, celebrated translator and founding editor of the Penguin Classics imprint. The book also includes an introduction and notes by Peter V. Jones.

For more than seventy years, Penguin has been the leading publisher of classic literature in the English-speaking world. With more than 1,700 titles, Penguin Classics represents a global bookshelf of the best works throughout history and across genres and disciplines. Readers trust the series to provide authoritative texts enhanced by introductions and notes by distinguished scholars and contemporary authors, as well as up-to-date translations by award-winning translators.
Homer was probably born around 725BC on the Coast of Asia Minor, now the coast of Turkey, but then really a part of Greece. Homer was the first Greek writer whose work survives.

He was one of a long line of bards, or poets, who worked in the oral tradition. Homer and other bards of the time could recite, or chant, long epic poems. Both works attributed to Homer – the Iliad and the Odyssey – are over ten thousand lines long in the original. Homer must have had an amazing memory but was helped by the formulaic poetry style of the time.

E. V. Rieu was a celebrated translator from Latin and Greek, and editor of Penguin Classics from 1944-1964. His son, D. C. H. Rieu has revised his work.

Peter Jones is former lecturer in classics at the University of Newcastle upon Tyne.

Peter Jones is former lecturer in classics at the University of Newcastle upon Tyne.
“Fitzgerald has solved virtually every problem that has plagued translators of Homer. The narrative runs, the dialogue speaks, the military action is clear, and the repetitive epithets become useful text rather than exotic relics.” –Atlantic Monthly

“Fitzgerald’s swift rhythms, bright images, and superb English make Homer live as never before…This is for every reader in our time and possibly for all time.”–Library Journal

“[Fitzgerald’s Odyssey and Iliad] open up once more the unique greatness of Homer’s art at the level above the formula; yet at the same time they do not neglect the brilliant texture of Homeric verse at the level of the line and the phrase.” –The Yale Review

“What an age can read in Homer, what its translators can manage to say in his presence, is one gauge of its morale, one index to its system of exultations and reticences. The supple, the iridescent, the ironic, these modes are among our strengths, and among Mr. Fitzgerald’s.” –National Review

With an Introduction by Gregory Nagy