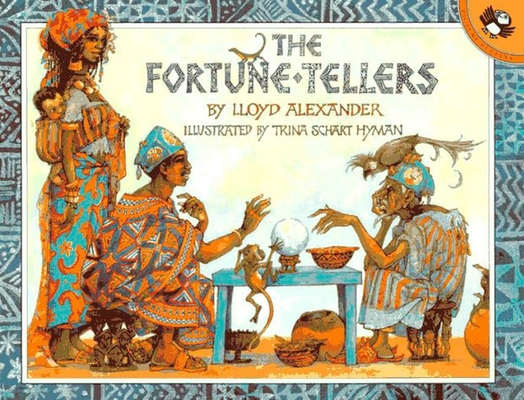 
Currently Unavailable
This original folktale set in Cameroon is full of adventure and sly humor. Lloyd Alexander's story of a young man visiting -- and then becoming -- the village fortune-teller is brought to vibrant life with some of Caldecott Medalist Trina Schart Hyman's most memorable artwork. Both children and adults will relish The Fortune-tellers."A funny, playful story that evokes the irony of the human condition." -- Booklist,starred review"Alexander narrates his original tale with folkloric verve and his own mellow brand of irony;Hyman realizes the African setting in...splendid illustrations. A winning tale, superlatively presented." -- Kirkus Reviews,pointerreviewLloyd Alexander's many achievements include a Newbery Medal, a Newbery Honor Medal, and the National Book Award.Trina Schart Hyman won the Caldecott Medal for Saint George and the Dragon and a Caldecott Honor Medal for Little Red Riding Hood, among numerous other awards.
Born on January 30, 1924, in Philadelphia, storyteller Lloyd Alexander spent his childhood filling his imagination with fantasies about other lands and eras. For ten years of his writing career, Alexander wrote for adults, then changed gears and wrote fiction for young people. Alexander has received a Newbery Medal, a Newbery Honor Award, a National Book Award, and several IRA-CBC Children’s Choice Awards. He is also the author of many ALA Notable Children’s Books and School Library Journal Best Books of the Year.

Trina Schart Hyman was a children's book illustrator for more than 30 years. Hyman graduated from the School of the Museum of Fine Arts, Boston, in 1960. She won the 1985 Caldecott Medal for her work on Margaret Hodges' book Saint George and the Dragon. Hyman was one of the first white illustrators along with Ezra Jack Keats to regularly incorporate black characters into her illustrations. She spent the last 10 years of her life with her romantic partner, Jean K. Aull, and passed away in 2004.