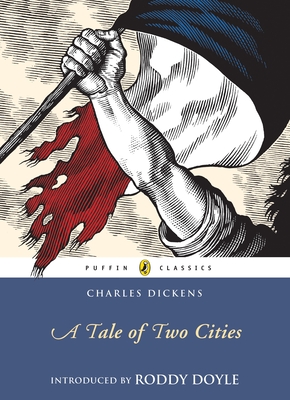 
Ships to Our Store in 1-5 Days
Charles Darnay and Sydney Carton are alike in appearance, different in character and in love with the same woman. In the midst of the French Revolution, Darnay, who has fled to London to escape the cruelty of the French nobility, must return to Paris to rescue his servant from death. But he endangers his own life and is captured. Carton may be able to help, but will his resemblance be enough to save Darnay's life? With an enticing introduction by bestselling author, Roddy Doyle.
Charles Dickens (1812-70) is one of the most recognized celebrities of English literature. His many books include Oliver Twist, Great Expectations and A Christmas Carol.
“[A Tale of Two Cities] has the best of Dickens and the worst of Dickens: a dark, driven opening, and a celestial but melodramatic ending; a terrifyingly demonic villainess and (even by Dickens’ standards) an impossibly angelic heroine. Though its version of the French Revolution is brutally simplified, its engagement with the immense moral themes of rebirth and terror, justice, and sacrifice gets right to the heart of the matter . . . For every reader in the past hundred and forty years and for hundreds to come, it is an unforgettable ride.”–from the Introduction by Simon Schama