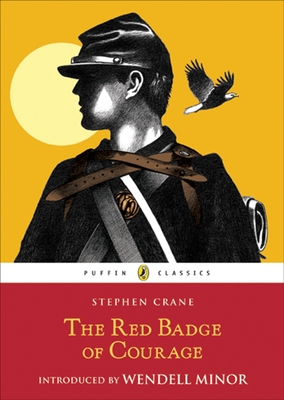 
Available at One of Our Locations
Henry Fleming dreams of the thrill of battle and performing heroic deeds in the American Civil War. But his illusions are shattered when he comes face to face with the bloodshed and horrors of war. Now he's a raw recruit, Henry experiences both fear and self-doubt. Will war make Henry a coward or a hero? A vivid fictionalised account of the experiences of an ordinary innocent young soldier on the battlefields of the American Civil War, introduced by American writer, illustrator and historian, Wendell Minor.
Stephen Crane (1871-1900), American novelist, poet, and short-story writer, best known for his novels Maggie: A Girl of the Streets (1893) and The Red Badge of Courage (1895) and the short stories "The Open Boat," "The Bride Comes to Yellow Sky," and "The Blue Hotel."
"The Red Badge Of Courage has long been considered the first great 'modern' novel of war by an American—the first novel of literary distinction to present war without heroics and this in a spirit of total irony and skepticism."—Alfred Kazin