American Colonies: The Settling of North America (The Penguin History of the United States, Volume 1) (Paperback) 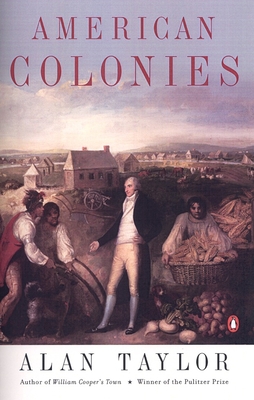 American Colonies: The Settling of North America (The Penguin History of the United States, Volume 1) (Paperback)


Available at One of Our Locations
A multicultural, multinational history of colonial America from the Pulitzer Prize-winning author of The Internal Enemy and American Revolutions

In the first volume in the Penguin History of the United States, edited by Eric Foner, Alan Taylor challenges the traditional story of colonial history by examining the many cultures that helped make America, from the native inhabitants from milennia past, through the decades of Western colonization and conquest, and across the entire continent, all the way to the Pacific coast.

Transcending the usual Anglocentric version of our colonial past, he recovers the importance of Native American tribes, African slaves, and the rival empires of France, Spain, the Netherlands, and even Russia in the colonization of North America. Moving beyond the Atlantic seaboard to examine the entire continent, American Colonies reveals a pivotal period in the global interaction of peoples, cultures, plants, animals, and microbes. In a vivid narrative, Taylor draws upon cutting-edge scholarship to create a timely picture of the colonial world characterized by an interplay of freedom and slavery, opportunity and loss.

"Compelling, readable, and fresh, American Colonies is perhaps the most brilliant piece of synthesis in recent American historical writing." —Phillip J. Deloria, Carroll Smith-Rosenberg Collegiate Professor of American Culture and History at the University of Michigan

“Even the serious student of history will find a great deal of previously obscure information. The book offers a balanced understanding of the diverse peoples and forces that converged on this continent and influenced the course of American history.” —Publishers Weekly (starred review)

“Crammed full of fascinating material uncovered by historians, archaeologists, and anthropologists in the past half-century.” —Newsday