Me and My Little Brain (The Great Brain #3) (Paperback) 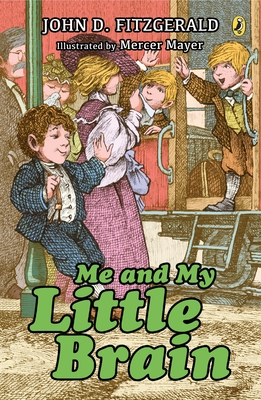 Me and My Little Brain (The Great Brain #3) (Paperback)

This is book number 3 in the The Great Brain series.

This third book in the series is a great combination of The Adventures of Tom Sawyer and The Terrible Two series, and is perfect for fans of Roald Dahl.

Tom a.k.a. the Great Brain, is off to boarding school.  Now his little brother, J.D., is free to follow in Tom's ingenious, conniving, and profitable footsteps.  All of J.D.'s attempts at turning a profit fail miserably, and he soon realizes that he just doesn't have that crafty Great Brain knack.  But when his younger brother is kidnapped, J.D. finds that his little brain may not be so ordinary after all . . .
John D. Fitzgerald was born in Utah and lived there until he left at eighteen to begin a series of interesting careers ranging from jazz drummer to foreign correspondent. His stories of The Great Brain were based on his own childhood in Utah with a conniving older brother named Tom. These reminiscenses led to eight memorable Great Brain books. John D. Fitzgerald also wrote several best-selling adult books, including Papa Married a Mormon. He died in Florida, his home of many years, at the age of eighty-one.
* "J. D. is ready to apply all the tricks he has learned . . . As amusing as the exploits of his brainy older brother!"--School Library Journal