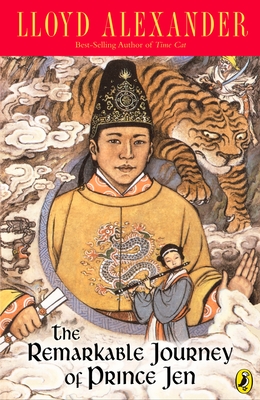 
Ships to Our Store in 1-5 Days
When Prince Jen volunteers to search for the legendary court of T'ien-kuo, a mysterious old man chooses six gifts for him to bear in homage: a saddle, a sword, a paint box, a bowl, a kite, and a flute. Puzzled by the gifts but full of high spirits and pride, Jen sets of--but stumbles almost immediately into a series of misfortunes. Only with the help of his faithful servant, Mafoo, and valiant flute-girl, Voyaging Moon, and only after a breathtakingly exciting string of adventures can Jen discover the real meaning of the gifts and face his true destiny. . . .
Born on January 30, 1924, in Philadelphia, storyteller Lloyd Alexander spent his childhood filling his imagination with fantasies about other lands and eras. For ten years of his writing career, Alexander wrote for adults, then changed gears and wrote fiction for young people. Alexander has received a Newbery Medal, a Newbery Honor Award, a National Book Award, and several IRA-CBC Children’s Choice Awards. He is also the author of many ALA Notable Children’s Books and School Library Journal Best Books of the Year.
Enthralling . . . It is not often that a book can tell a breathtaking story, offer useful lessons on life, and paint a lively cultural backdrop. Alexander has done all that, and more. (Booklist, starred review)