The Waste Land and Other Poems (Paperback) 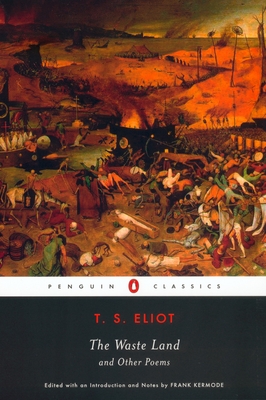 The Waste Land and Other Poems (Paperback)

While recovering from a mental collapse in a Swiss sanitarium in 1921, T. S. Eliot finished what became the definitive poem of the modern condition, one that still casts a large and ominous shadow over twentieth-century poetry. Built upon the imagery of the Grail legend, the Fisher King, and ancient fertility cults, “The Waste Land” is both a poetic diagnosis of an ailing civilization and a desperate quest for spiritual renewal. Through pastiche and collage Eliot unfolds a nightmarish landscape of sexual disorder and spiritual desolation, inhabited by the voice (literary, historical, mythic, contemporary) of an unconscious that is at turns deeply personal and culturally collective. This edition includes “The Love Song of J. Alfred Prufrock,” “Portrait of a Lady,” “Gerontion,” and more.

For more than seventy years, Penguin has been the leading publisher of classic literature in the English-speaking world. With more than 1,800 titles, Penguin Classics represents a global bookshelf of the best works throughout history and across genres and disciplines. Readers trust the series to provide authoritative texts enhanced by introductions and notes by distinguished scholars and contemporary authors, as well as up-to-date translations by award-winning translators.

Thomas Stearns Eliot (1888–1965) was born and raised in St. Louis, Missouri, and spent many of his adult years in England. He worked for a bank while writing poetry, teaching, and reviewing, and was soon recognized as a force in the British literary world. The Waste Land confirmed his reputation as an innovative poet.

Frank Kermode (1919–2010) was one of the twentieth century's greatest critics. He wrote and edited many works, among them The Sense of Ending and Shakespeare’s Language.
By the Winner of the Nobel Prize in Literature