The Lobster Coast: Rebels, Rusticators, and the Struggle for a Forgotten Frontier (Paperback) 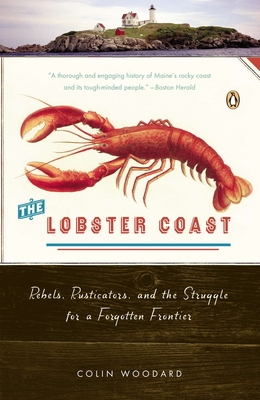 The Lobster Coast: Rebels, Rusticators, and the Struggle for a Forgotten Frontier (Paperback)


Available at One of Our Locations
“A thorough and engaging history of Maine’s rocky coast and its tough-minded people.”—Boston Herald

“[A] well-researched and well-written cultural and ecological history of stubborn perseverance.”—USA Today

For more than four hundred years the people of coastal Maine have clung to their rocky, wind-swept lands, resisting outsiders’ attempts to control them while harvesting the astonishing bounty of the Gulf of Maine. Today’s independent, self-sufficient lobstermen belong to the communities imbued with a European sense of ties between land and people, but threatened by the forces of homogenization spreading up the eastern seaboard.

In the tradition of William Warner’s Beautiful Swimmers, veteran journalist Colin Woodard (author of American Character: A History of the Epic Struggle Between Individual Liberty and the Common Good) traces the history of the rugged fishing communities that dot the coast of Maine and the prized crustacean that has long provided their livelihood. Through forgotten wars and rebellions, and with a deep tradition of resistance to interference by people “from away,” Maine’s lobstermen have defended an earlier vision of America while defying the “tragedy of the commons”—the notion that people always overexploit their shared property. Instead, these icons of American individualism represent a rare example of true communal values and collaboration through grit, courage, and hard-won wisdom.

Colin Woodard, an award-winning writer and journalist, is currently the state and national affairs writer at the Portland Press Herald and Maine Sunday Telegram and received a 2012 George Polk Award for an investigative project he did for those papers. A longtime foreign correspondent for The Christian Science Monitor, the San Francisco Chronicle, and The Chronicle of Higher Education, he has reported from more than fifty foreign countries and seven continents. His work has appeared in dozens of publications, including The Economist, Smithsonian, The Washington Post, Politico, Newsweek, The Daily Beast, The Guardian, Bloomberg View, and Washington Monthly. A graduate of Tufts University and the University of Chicago, he is the author of several books, including American Nations and The Republic of Pirates.
“A thorough and engaging history of Maine’s rocky coast and its tough-minded people.”
—Boston Herald

“Delves deeply and reflectively into the history of the coast of Maine and its people.”
—The Boston Globe

“[A] well-researched and well-written cultural and ecological history of stubborn perseverance.”
—USA Today

“Lively. . . . Woodard uses the fishermen of Monhegan Island as the focus for a broad historical sweep, ranging from the settlers who arrived in Maine a decade before the Mayflower landed at Plymouth, to onslaughts from Indian tribes, raids by the French and an influx of ‘rusticators’ who put the state on the map as an idyllic holiday destination. The author suggests that Maine's isolated lobster-fishing communities continue to embody Jefferson’s Utopian vision of America—‘an egalitarian republic of small, self-sufficient producers, where democracy is practiced directly by the citizens, and aristocratic privilege is unrecognized or unknown.’”
—The Economist

“Woodard doesn’t disguise his pique with the forces at work. Maine is worth fighting for—as is any village with distinctly etched local character and community.”
—The Christian Science Monitor

“Meticulous . . .For those who received the sanitized version of American history in elementary school, the truth comes as a bit of a shock.”
—The Ottowa Review

“A feast . . . Woodard uses the lobster to tell the whole history of Maine.”
—Working Waterfront

“A stellar informal history . . . The Lobster Coast is a cautionary tale, superbly told, riveting and deserving of much attention. It is a primer for land use, conservation, and the effects of bad politics.”
—The Kingston Observer (Massachusetts)

“Fascinating . . . horrifying account of political intrigue and bloody battles between French and English, Indians and English, colonists and just about everybody else, all of which, for better or for worse, shaped the Down East Yankee character . . . I’d make The Lobster Coast required reading.”
—Bar Harbor Times

“The Lobster Coast tells the lobster’s tale in satisfying depth and breadth. . . . Woodard writes about his native state and its ungainly mascot with grace and authority, shining a clear light through the mystery and lore that have long surrounded both.”
—Northern Sky News