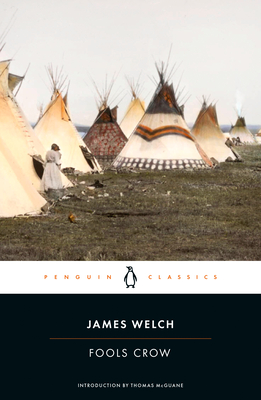 The 25th-anniversary edition of "a novel that in the sweep and inevitability of its events...is a major contribution to Native American literature." (Wallace Stegner)

In the Two Medicine Territory of Montana, the Lone Eaters, a small band of Blackfeet Indians, are living their immemorial life. The men hunt and mount the occasional horse-taking raid or war party against the enemy Crow. The women tan the hides, sew the beadwork, and raise the children. But the year is 1870, and the whites are moving into their land. Fools Crow, a young warrior and medicine man, has seen the future and knows that the newcomers will punish resistance with swift retribution. First published to broad acclaim in 1986, Fools Crow is James Welch's stunningly evocative portrait of his people's bygone way of life.

James Welch (1940 – 2003) was the author of the novels Winter in the Blood, The Death of Jim Loney, Fools Crow (for which he received the Los Angeles Times Book Prize, an American Book Award, and the Pacific Northwest Booksellers Award), The Indian Lawyer, and The Heartsong of Charging Elk.  Welch also wrote a nonfiction book, Killing Custer: The Battle of the Little Bighorn and the Fate of the Plains Indians, and a work of poetry, Riding the Earthboy 40. He attended schools on the Blackfeet and Fort Belknap reservations in Montana, graduated from the University of Montana, where he studied writing with the late Richard Hugo, and served on the Montana State Board of Pardons.

Thomas McGuane is the author of ten novels, most recently Driving on the Rim. He lives on a ranch in Montana.