The Sultan and the Queen: The Untold Story of Elizabeth and Islam (Paperback) 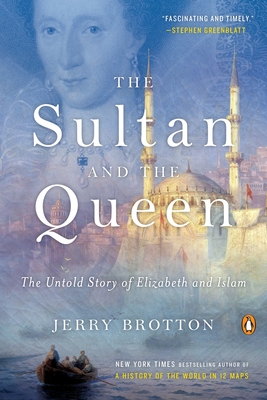 The fascinating story of Queen Elizabeth’s secret outreach to the Muslim world, which set England on the path to empire, by The New York Times bestselling author of A History of the World in Twelve Maps

We think of England as a great power whose empire once stretched from India to the Americas, but when Elizabeth Tudor was crowned Queen, it was just a tiny and rebellious Protestant island on the fringes of Europe, confronting the combined power of the papacy and of Catholic Spain. Broke and under siege, the young queen sought to build new alliances with the great powers of the Muslim world. She sent an emissary to the Shah of Iran, wooed the king of Morocco, and entered into an unprecedented alliance with the Ottoman Sultan Murad III, with whom she shared a lively correspondence.

The Sultan and the Queen tells the riveting and largely unknown story of the traders and adventurers who first went East to seek their fortunes—and reveals how Elizabeth’s fruitful alignment with the Islamic world, financed by England’s first joint stock companies, paved the way for its transformation into a global commercial empire.

Jerry Brotton is a professor of Renaissance studies at Queen Mary University of London. A renowned broadcaster and critic, he is the author of Global Interests: Renaissance Art Between East and West (with Lisa Jardine), The Renaissance Bazaar, The Sale of the Late King’s Goods, a finalist for the Samuel Johnson Prize and the Hessell-Tiltman Prize, Great Maps, and The New York Times bestselling, award-winning A History of the World in Twelve Maps, which has been translated into eleven languages. The Sultan and the Queen published as This Orient Isle in the UK, was a Financial Times Book of the Year.

“Jenkinson is just one of the fascinating characters who forged England’s first sustained interaction with the Muslim world, a neglected aspect of Elizabethan history that Jerry Brotton brings vividly to life in this elegant and entertaining book… Out there, for all the talk of idolatry and infidels, discussions could be brisk and purposeful, boundaries porous, identities fluid. Even in that religiously charged era, the so-called clash of civilizations could sound very faint indeed.”
– Jason Goodwin, The New York Times Book Review

“We are accustomed to seeing Elizabeth as a dazzling but essentially limited monarch, obsessed with defending her small corner of northwest Europe. . . But as Brotton shows, for the last quarter of her reign, England was also deeply engaged with the three great powers of the Islamic world. The Sultan and the Queen is both a colorful narrative of that extraordinary time and a reminder that our own fortunes and those of the wider Islamic world have been intertwined for much longer than we might think.”
—Dan Jones, The Times

"Queen Elizabeth I had bad teeth. The snaggle-toothed sovereign owed her decay to copious amounts of sugar that began flowing into England from Morocco in the 16th century. Candied fruits were her absolute favorite. The story of Elizabeth’s unfortunate smile is but one facet of a much larger and far more important history of economic, cultural and political relations between the queen’s rather negligible island, the sultan of Morocco and the fabulously wealthy Muslim world that dominated half of the Mediterranean and controlled Europe’s access to the east. Jerry Brotton’s wonderful book reveals this instructive history of Protestant England’s intense interactions with Islam, showing how Muslims shaped English culture, consumerism and literature during the half-millennium between the Crusades and the rise of the British Empire in the Middle East."
— The Wall Street Journal

“Impressive and highly readable. . . Brotton emphasizes the extent to which Elizabethan England was shot through with influences, stories, individuals and products drawn from the Islamic world. The orient is not elsewhere but already here, both thrillingly and uncomfortably close to home. . . Brotton’s book crackles with an energy that illuminates and vivifies its larger claims.”
—Financial Times

“The Sultan and the Queen evokes an England struggling to find a place for itself in a world that it had not yet learned to dominate, and often making colossal diplomatic blunders in the process. Brotton is a gifted writer who is able to present this history as an exciting series of critical and suspense-filled encounters."
--The Washington Post

“Jerry Brotton’s sparkling new book sets out just how extensive and complex England’s relationship with the Arab and Muslim world once was. . . It seems extraordinary that, in a time before mass travel, when most people died a stone’s throw from where they were born, there were nevertheless those whose adventures led them to the edges of the known world – and to cultures so different from their own as to seem dreamlike. But Brotton’s book is full of them. . . At a time when many see Islam as a recent and strange intruder, Brotton’s excellent history is a reminder that a careful study of England’s 'island story' shows just how wrong they are.”
—The Guardian

"I adore this book. It resonated deeply with me."
–  Elif Shafak, author of The Bastard of Istanbul

"Fascinating and timely. . . An illuminating account of a neglected aspect of Elizabethan England:  its rich, complex, and ambivalent relations with the Muslim world."
—Stephen Greenblatt, author of The Swerve

“A lively, smart, exhaustively researched book… Traders, using the new-fangled concept of joint-stock companies to spread the commercial risk, shipped home everything from Oriental carpets and luxurious silks to sugar and saltpetre, essential in making gunpowder… Brotton delves into diaries, letters and archives to uncover a long-ignored part of English history. Trade was anything but smooth or orderly. English adventurers struggled to understand the cultures, rivalries and religious differences. (The term Muslim would not be used in England until 1614.) Pirates and shipwrecks were constant dangers, as was capture.”
—Macleans

“An exceptionally rich and brilliant book. In bringing to life Elizabethan England’s ambivalent engagement with Islam, Jerry Brotton shows how profoundly that encounter shaped English trade, diplomacy, and the Islam-obsessed drama of Shakespeare and his contemporaries. The story he tells could not be more timely.”
—James Shapiro, author The Year of Lear: 1606

“This fascinating account uncovers the lively exchange between Elizabeth’s England, the Ottoman Empire, and Morocco. Christianity and Islam were still at odds, but Elizabeth gladly sought alliance with Muslim lands against the shared threat of Catholic Europe.”
—Natalie Zemon Davis, author of The Return of Martin Guerre