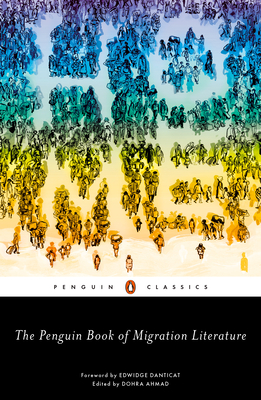 
Available at One of Our Locations
[Ahmad's] "introduction is fiery and charismatic... This book encompasses the diversity of experience, with beautiful variations and stories that bicker back and forth." --Parul Sehgal, The New York Times

The first global anthology of migration literature featuring works by Mohsin Hamid, Zadie Smith, Marjane Satrapi, Salman Rushdie, and Warsan Shire, with a foreword by Edwidge Danticat, author of Everything Inside

Every year, three to four million people move to a new country. From war refugees to corporate expats, migrants constantly reshape their places of origin and arrival. This selection of works collected together for the first time brings together the most compelling literary depictions of migration.

Organized in four parts (Departures, Arrivals, Generations, and Returns), The Penguin Book of Migration Literature conveys the intricacy of worldwide migration patterns, the diversity of immigrant experiences, and the commonalities among many of those diverse experiences. Ranging widely across the eighteenth through twenty-first centuries, across every continent of the earth, and across multiple literary genres, the anthology gives readers an understanding of our rapidly changing world, through the eyes of those at the center of that change. With thirty carefully selected poems, short stories, and excerpts spanning three hundred years and twenty-five countries, the collection brings together luminaries, emerging writers, and others who have earned a wide following in their home countries but have been less recognized in the Anglophone world. Editor of the volume Dohra Ahmad provides a contextual introduction, notes, and suggestions for further exploration.
Dohra Ahmad is professor of English at St. John's University. She is the author of Landscapes of Hope: Anti-Colonial Utopianism in America (2009) and editor of Rotten English: A Literary Anthology (2007).

Edwidge Danticat is the author of several books, including Breath, Eyes, Memory, an Oprah Book Club selection; Krik? Krak!; a National Book Award finalist, The Farming of Bones; The Dew Breaker; Create Dangerously; Claire of the Sea Light; and the forthcoming Everything Inside. She is also the editor of The Butterfly's Way: Voices from the Haitian Dyaspora in the United States, The Best American Essays 2011, Haiti Noir, and Haiti Noir 2. Her memoir, Brother, I'm Dying, was a 2007 finalist for the National Book Award and a 2008 winner of the National Book Critics Circle Award for autobiography. She is a 2009 MacArthur fellow.
“Well-curated collection… The breadth of Ahmad's selections is impressive… This is a first-rate starting point for exploring migration literature and is almost certain to be taught in schools in the near future. Don't miss the ‘Suggestions for Further Reading and Viewing’ at the back of the text, which is also excellently curated…A welcome, pocket-sized introduction to migration literature.”
—Kirkus

“The diversity of viewpoints and genres makes for an invaluable introduction to the personal dimensions of global immigration.”
—Booklist

“Editor Dohra Ahmad has curated a challenging and insightful collection that attempts to reveal the myriad ways of experiencing human movement—forced migration and exile are only a part of this story, albeit an important one (…) By presenting history as human stories, it acts as a gateway to empathy and understanding. The collection succeeds where politicians, international organizations, and even journalists sometimes fail because it reminds us of our common humanity. This thoughtful and provoking anthology from Penguin deserves its spot as the new cornerstone text for anyone interested in migration—indeed, the human condition—today.”
—Words Without Borders, selected as a Favorite International Read from 2019