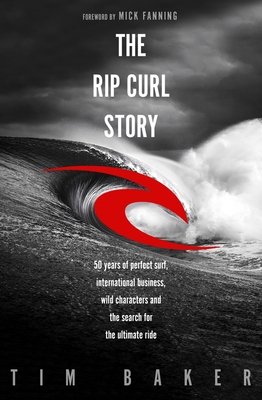 
Currently Unavailable
The Rip Curl Story is the remarkable tale of two young surfers – Doug ‘Claw’ Warbrick and Brian Singer – who pursued an audacious dream to make a living in pursuit of the ultimate ride.

The brand they built, Rip Curl, not only satisfied their own surf wanderlust, but also inspired countless others, riding the wave of the global youth revolution of the late ’60s.

Rip Curl’s mantra became ‘the Search’: the pursuit of new waves on distant shores, new thrills – skiing, snowboarding, windsurfing – and better equipment to elevate the experience. Along the way they supported the careers of many of the world’s great surfers – from Midget Farrelly to Michael Peterson, Tom Curren to Damien Hardman, Pam Burridge to Stephanie Gilmore, and of course Tyler Wright and Mick Fanning.

The Rip Curl Story will make you want to surf more, travel further, follow through on that great business idea and pursue your own Search.
Tim Baker is the bestselling author of Bustin' Down the Door, High Surf, Occy, Surf for Your Life (with Mick Fanning), Surfari and Century of Surf. He is a former editor of Tracks and Surfing Life magazines. He has twice won the Surfing Australia Hall of Fame Culture Award and been nominated for the CUB Australian Sports Writing Awards. His work has appeared in Rolling Stone, the Sydney Morning Herald, the Australian Financial Review, the Bulletin, Inside Sport, Playboy, GQ, the Surfers Journal and Qantas: The Australian Way, as well as surfing magazines around the world.