Guns for General Washington: A Story of the American Revolution (Great Episodes) (Paperback) 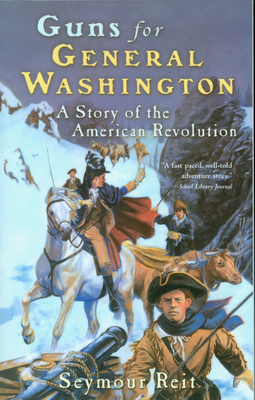 Guns for General Washington: A Story of the American Revolution (Great Episodes) (Paperback)

A tale of courage and bravery—the daring and dangerous trek that gave young America its first real victory, paving the way for the future of a great democratic nation.

This exciting middle grade novel is the true story of Will Knox, a nineteen-year-old young man who transported 183 cannons from New York’s Fort Ticonderoga to Boston—in the dead of winter—to help George Washington win an important battle.

Paul Revere's midnight ride...Washington crossing the Delaware...the winter crisis at Valley Forge... Some events in America's War for Independence are known to all. This book brings to history fans the story of another true episode, just as dramatic but not nearly as well known.

As you read these pages, you will agree that Colonel Knox's great adventure was a stirring, suspenseful, and important event in American history.

SEYMOUR REIT is the author of more than eighty books for young readers. An experienced animated cartoonist, he is also the creator of Casper the Friendly Ghost. Mr. Reit lives in New York City.