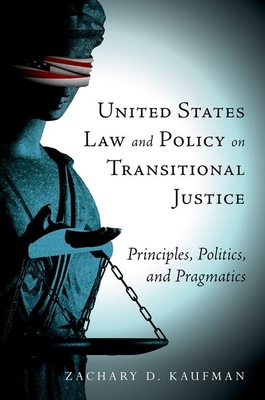 In United States Law and Policy on Transitional Justice: Principles, Politics, and Pragmatics, Zachary D. Kaufman explores the U.S. government's support for, or opposition to, certain transitional justice institutions. By first presenting an overview of possible responses to atrocities (such as war crimes tribunals) and then analyzing six historical case studies, Kaufman evaluates why and how the United States has pursued particular transitional justice options since World War II. This book challenges the "legalist" paradigm, which postulates that liberal states pursue war crimes tribunals because their decision-makers hold a principled commitment to the rule of law. Kaufman develops an alternative theory-"prudentialism"-which contends that any state (liberal or illiberal) may support bona fide war crimes tribunals. More generally, prudentialism proposes that states pursue transitional justice options, not out of strict adherence to certain principles, but as a result of a case-specific balancing of politics, pragmatics, and normative beliefs. Kaufman tests these two competing theories through the U.S. experience in six contexts: Germany and Japan after World War II, the 1988 bombing of Pan Am flight 103, the 1990-1991 Iraqi offenses against Kuwaitis, the atrocities in the former Yugoslavia in the 1990s, and the 1994 Rwandan genocide. Kaufman demonstrates that political and pragmatic factors featured as or more prominently in U.S. transitional justice policy than did U.S. government officials' normative beliefs. Kaufman thus concludes that, at least for the United States, prudentialism is superior to legalism as an explanatory theory in transitional justice policymaking.

Zachary D. Kaufman, J.D., Ph.D. is a Senior Fellow at the Harvard University John F. Kennedy School of Government as well as a Visiting Fellow at both Yale Law School and Yale University's Genocide Studies Program. Previously, Dr. Kaufman taught in Yale University's Department of Political Science and George Washington University's Elliott School of International Affairs, and he held fellowships, lectureships, or research positions at the U.S. Supreme Court, Yale Law School, Harvard Law School, Yale School ofManagement, Stanford University, and New York University. He also worked at the U.S. Department of Justice and was the first American to serve at the International Criminal Court. Dr. Kaufman is the author of United States Law and Policy on Transitional Justice: Principles, Politics, and Pragmatics (Oxford, 2016), the editor of Social Entrepreneurship in the Age of Atrocities: Changing Our World (2012), the co-editor (with Dr. Phil Clark) of After Genocide: TransitionalJustice, Post-conflict Reconstruction, and Reconciliation in Rwanda and Beyond (Oxford, 2009), and the author of dozens of articles and book chapters. A term member of the Council on Foreign Relations and a member of the International Institute for Strategic Studies, he holds a D.Phil. (Ph.D.) inInternational Relations from the University of Oxford (where he was a Marshall Scholar), a J.D. from Yale Law School (where he was an Olin Fellow and Editor-in-Chief of the Yale Law & Policy Review), and a B.A. in Political Science from Yale University (where he was the student body president).