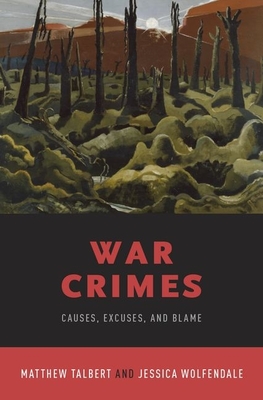 By Matthew Talbert
$82.00
Email or call for price

In 2005, US Marines killed 24 unarmed Iraqi civilians in the town of Haditha, including several children. How should we assess the perpetrators of this and other war crimes? Is it unfair to blame the Marines because they were subject to situational pressures such as combat stress (and had lost
one of their own in combat)? Or should they be held responsible for their actions, since they intentionally chose to kill civilians? In this book, Matthew Talbert and Jessica Wolfendale take up these moral questions and propose an original theory of the causes of war crimes and the responsibility of war crimes perpetrators. In the first half of the book, they challenge accounts that explain war crimes by reference to the
situational pressures endured by military personnel, including peer pressure, combat stress, and propaganda. The authors propose an alternative theory that explains how military personnel make sense of their participation in war crimes through their self-conceptions, goals, and values. In the second
half of the book, the authors consider and reject theories of responsibility that excuse perpetrators on the grounds that situational pressures often encourage them to believe that their behavior is permissible. Such theories of responsibility are unacceptably exculpatory, implying it is
unreasonable for victims of war crimes to blame their attackers. By contrast, Talbert and Wolfendale argue that perpetrators of war crimes may be blameworthy if their actions express objectionable attitudes towards their victims, even if they sincerely believe that what they are doing is right.

Matthew Talbert is Associate Professor of Philosophy at West Virginia University and Senior Researcher in Philosophy at Lund University. His research focuses on identifying the social, psychological, and metaphysical conditions of moral responsibility. He is the author of a number of articles onmoral responsibility and one book, Moral Responsibility: An Introduction (Polity, 2016). Jessica Wolfendale is Professor of Philosophy at Marquette University. She is the author of Torture and the Military Profession (Palgrave-Macmillan, 2007), co-editor of New Wars and New Soldiers: Military Ethics in the Contemporary World (Routledge, 2011), and has published numerous articles andbook chapters on topics including security, torture, terrorism, bioethics, and military ethics.