Armageddon and Paranoia: The Nuclear Confrontation Since 1945 (Hardcover) 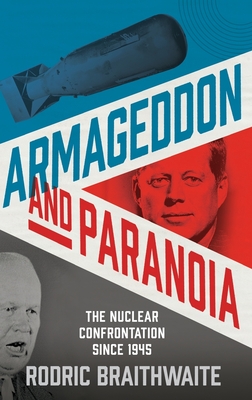 Armageddon and Paranoia: The Nuclear Confrontation Since 1945 (Hardcover)


Ships to Our Store in 1-5 Days
Former British Ambassador to the Soviet Union and author of the definitive account of the Soviet invasion and occupation of Afghanistan, Sir Rodric Braithwaite offers here a tour d'horizon of nuclear policy from the end of World War II and start of the Cold War to the present day. Armageddon and Paranoia unfolds the full history of nuclear weapons that began with the arms race between the United States and the Soviet Union and now extends worldwide. For decades, an apocalypse seemed imminent, staved off only by the certainty that if one side launched these missiles the other would launch an equally catastrophic counterstrike. This method of avoiding all-out nuclear warfare was called "Deterrence," a policy of Mutually Assured Destruction (MAD). Still, though neither side actively wanted to plunge the world into nuclear wasteland, the possibility of war by misjudgment or mistake meant fears could never be entirely assuaged. Both an exploration of Deterrence and the long history of superpower nuclear policy, Armageddon and Paranoia comes at a time when tensions surrounding nuclear armament have begun mounting once more. No book until this one has offered so comprehensive a history of the topic that has guided--at times dominated--the world in which we live.

Rodric Braithwaite is former British Ambassador to the Soviet Union and Russian Federation. His previous works include Moscow 1941: A City and Its People at War and Afgantsy: The Russians in Afghanistan.