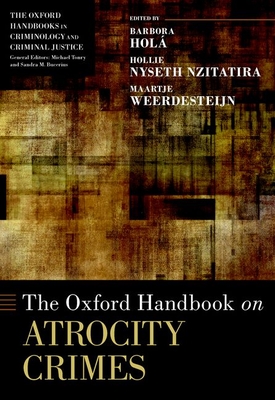 Social scientific research focusing on mass atrocities, which include widespread or systematic crimes such as genocide, crimes against humanity, and war crimes, expanded after the end of the Cold War. Mass violence in the former Yugoslavia, as well as the genocide in Rwanda, sparked new
research initiatives in numerous disciplines. Scholars working in various academic fields such as international (criminal) law, political science, psychology, sociology, history, anthropology, and demography began to focus on the causes and consequences of atrocity crimes. Yet knowledge generated by
these various disciplines remains scattered and has not been integrated into a single edited volume. The Oxford Handbook on Atrocity Crimes surveys and further develops the evolving field of atrocity crimes studies by combining major mono-, inter-, and multi-disciplinary research on atrocity crimes in one comprehensive volume. With contributions of leading scholars, this handbook will be an
essential source and reference tool. Unique in its thematic focus (atrocity crimes as an overarching phenomenon, including crimes of genocide, crimes against humanity, and war crimes) as well as in its comprehensive scope, the book covers the etiology, the actors involved, the harm caused, the
reactions to atrocity crimes, and in-depth analyses of understudied situations of war crimes, crimes against humanity, and genocide.