All Bullshit and Lies?: Insincerity, Irresponsibility, and the Judgment of Untruthfulness (Hardcover) 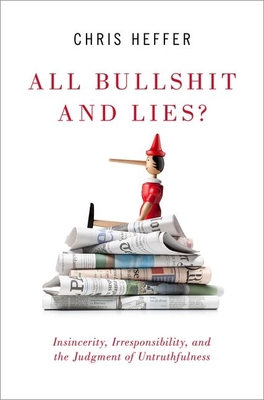 By Chris Heffer
Email or call for price
Special Order

In a postfactual world in which claims are often held to be true only to the extent that they confirm pre-existing or partisan beliefs, this book asks crucial questions: how can we identify the many forms of untruthfulness in discourse? How can we know when their use is ethically wrong? How can we judge untruthfulness in the messiness of situated discourse? Drawing on pragmatics, philosophy, psychology, and law, All Bullshit and Lies? develops a comprehensive framework for analyzing untruthful discourse in situated context. TRUST, or Trust-related Untruthfulness in Situated Text, sees untruthfulness as encompassing not only deliberate manipulations of what is believed to be true (the insincerity of withholding, misleading, and lying) but also the distortions that arise from an irresponsible attitude towards the truth (dogma, distortion, and bullshit). Chris Heffer discusses times when truth is not "in play," as in jokes or fiction, as well as instances when concealing the truth can achieve a greater good. The TRUST framework demonstrates that untruthfulness becomes unethical in discourse, though, when it unjustifiably breaches the trust an interlocutor invests in the speaker. In addition to the theoretical framework, this book provides a clear, practical heuristic for analyzing discursive untruthfulness and applies it to such cases of public discourse as the Brexit "battle bus," Trump's tweet about voter fraud, Blair and Bush's claims about weapons of mass destruction, and the multiple forms of untruthfulness associated with the Skripal poisoning case. In All Bullshit and Lies? Chris Heffer turns a critical eye to fundamental questions of truthfulness and trust in our society. This timely and interdisciplinary investigation of discourse provides readers a deeper theoretical understanding of untruthfulness in a postfactual world.

Chris Heffer is Reader in Linguistics in the School of English, Communication, and Philosophy at Cardiff University. He is the author of The Language of Jury Trial (2005) and editor of Legal-Lay Communication: Textual Travels in the Law (OUP 2013).