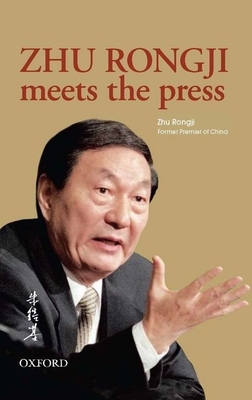 Zhu Rongji, the Premier of China from 1998 to 2003, the unswerving economic reformer who helped to tame rampant inflation and put China firmly on the path to international economic integration, became a respected and popular figure among world business leaders, heads of state, diplomats, and
particularly among progressive reformers within China. Zhu Rongji Meets the Press --a collection of the Premier's talks and interviews with reporters from around the globe--is the first book to offer such a comprehensive and front-row view of Zhu's conduct of China's foreign and economic policy Comprised of four parts, the book of talks by Zhu, presented within, collectively give a picture of the history of Zhu's tenure; of the many internal and external challenges faced by China more broadly at the time; and of Zhu the man and his vision for China in the age of global financial
interdependence. It also includes interviews with Zhu from earlier periods (1993 to 1997, in his capacities as Vice Premier of the State Council, as well as Governor of the People's Bank of China). The book also includes a foreword by former US Secretary of State Henry Kissinger, an interview with
Zhu specifically for this book, and a general introduction by the editors. For a man known to speak frequently off-script, this set of records of Zhu's talks--explaining everything from China's program of reforming state industry and transforming the financial system, and its approach to joining the World Trade Organization, to its response to the bombing of the Chinese
Embassy in Belgrade in May of 1999--will make a significant contribution to understanding China with Zhu at the policy helm. In a nation where biographies and particularly autobiographies of high-level officials are hard to come by (and tend to be posthumous, as in the recently published journals of
Zhao Ziyang), these on-the-record talks and exchanges can be an important, alternative means of accessing the character of a leader. Collectively, they give a good picture of Zhu in action--sparring and joking with journalists, stating and explaining China's official fixed positions on important
policy matters, while suggesting China's flexibility and openness in others. His encounters and joint talks with such world figures as former President Bill Clinton, Peter Kann, publisher of The Wall Street Journal, journalists such as Jim Lehrer of PBS, and a broad array of foreign journalists,
economists and industry leaders, are faithfully recorded here. While Western readers will have read some articles in English resulting from some of the foreign media briefings included here, the talks in this book are translated from the original Chinese transcripts made by Zhu's office of his Chinese comments at briefings and interviews (without the
third-party lens of the simultaneous translator). This will give readers a you were there feel to the dialogues, as well as a closer and truer reflection of the words spoken by the Premier. This book of talks by, and with the man who was called China's economic tsar is a valuable historic record for China scholars and researchers, and a compelling historic read for those who closely follow Chinese leadership, politics and economic reform and development.

Zhu Rongji served as the Mayor and Party chief of Shanghai between 1987 and 1991 before becoming Vice-Premier and then the fifth Premier of the People's Republic of China from March 1998 to March 2003. Known as a forceful administrator, Zhu oversaw China's financial and market transformations, extraordinary economic growth, and increased assertiveness in international affairs. Zhu, who became a respected and well-liked figure among global political and business leaders, retired in 2003.