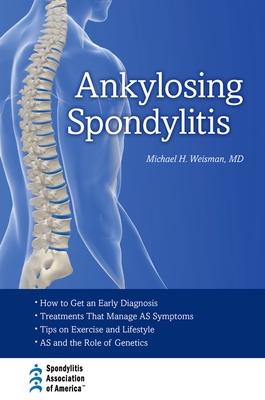 
call to order
Ankylosing Spondylitis is an inflammatory arthritis that affects the spine and sacroiliac joints as well as other parts of the body, and that can eventually lead, in some patients, to complete fusion of the vertebrae and total rigidity. AS is not a rare health problem, but is in fact found in
almost one percent of the US population, typically strikes young people and young families, and in its various forms is probably more common than rheumatoid arthritis.
In this invaluable guide, Dr. Michael H. Weisman, one of America's leading authorities on AS, provides a down-to-earth, crystal-clear guide that is ideal for patients and their family. Dr. Weisman explains what AS is, discusses the genetic background to the disease (including the genes that
researchers think may predispose some people to AS), explains how to diagnose the disease early and possibly prevent the later development of debilitating rigidity, the use of MRI for early detection, and much more. The book outlines which medications (such as TNF inhibitors) seem the most promising
right now, the various drug side effects, the value of physical therapy, other treatment approaches, and whether surgery can be used to manage the complications of the disease.
AS can lead to severe disability, but even those who have a milder form will experience painful flares alternating with periods of remission. Since it is a progressive disease in many patients, it is very important to reach patients as early as possible. This book will arm patients with the
vital information they need to combat the disease.
Laurie M. Savage, the Executive Director of the Spondylitis Association of America (SSA), the main patient support group world-wide, has written a foreword to the book. In addition, SSA will endorse the book and their logo will appear on the cover.

Michael H. Weisman, MD, is Director of the Division of Rheumatology at Cedars-Sinai Medical Center, and Professor of Medicine, Cedars-Sinai Medical Center and the David Geffen School of Medicine, University of California, Los Angeles. The author is a leader in the field of AS-related research andpatient care and recently published the professional book Ankylosing Spondylitis and the Spondyloarthropathies.