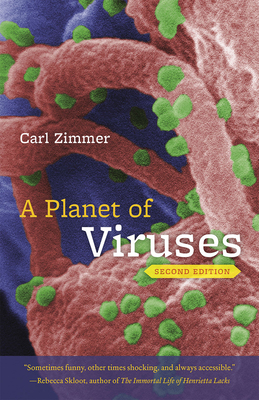 
Currently Unavailable
For years, scientists have been warning us that a pandemic was all but inevitable. Now it's here, and the rest of us have a lot to learn.

Fortunately, science writer Carl Zimmer is here to guide us. In this compact volume, he tells the story of how the smallest living things known to science can bring an entire planet of people to a halt--and what we can learn from how we've defeated them in the past.

Planet of Viruses covers such threats as Ebola, MERS, and chikungunya virus; tells about recent scientific discoveries, such as a hundred-million-year-old virus that infected the common ancestor of armadillos, elephants, and humans; and shares new findings that show why climate change may lead to even deadlier outbreaks. Zimmer’s lucid explanations and fascinating stories demonstrate how deeply humans and viruses are intertwined. Viruses helped give rise to the first life-forms, are responsible for many of our most devastating diseases, and will continue to control our fate for centuries. Thoroughly readable, and, for all its honesty about the threats, as reassuring as it is frightening, A Planet of Viruses is a fascinating tour of a world we all need to better understand.
Carl Zimmer is a columnist for the New York Times, where he has contributed articles since 2004. His writing has earned a number of awards, including the Stephen Jay Gould Prize, awarded by the Society for the Study of Evolution. His latest book is Life’s Edge: The Search for What It Means to Be Alive.  His 2018 book, She Has Her Mother’s Laugh: The Powers, Perversions, and Potential of Heredity, won the 2019 National Academies Communication Award and was named the best science book of 2018 by the Guardian. He is professor adjunct of biophysics and biochemistry and a lecturer in English at Yale University. He lives in Guilford, CT.
"A brief, highly accessible introduction to viruses and their impact on the world. . . . Highly recommended."
— Choice

“Just about everything you’ve always wanted to know—and a lot you’ll probably wish you didn’t know—about the viruses that have caused humanity so much grief throughout history.”
— Praise for the first edition

“In A Planet of Viruses, science writer Carl Zimmer accomplishes in a mere 100 pages what other authors struggle to do in 500: He reshapes our understanding of the hidden realities at the core of everyday existence. . . . Whether he’s exploring how viruses come to America or picking apart the surprisingly complicated common cold, Zimmer’s train of thought is concise and illuminating.”
— Praise for the first edition

“Absolutely top-drawer popular science writing. . . . Zimmer’s information-packed, superbly readable look at virological knowledge awakens readers to the fact that not only are viruses everywhere but we couldn’t live without them.”
— Praise for the first edition

“A smart, beautiful, and somewhat demented book that’s likely to give you a case of the willies. In the best way possible.”
— Praise for the first edition