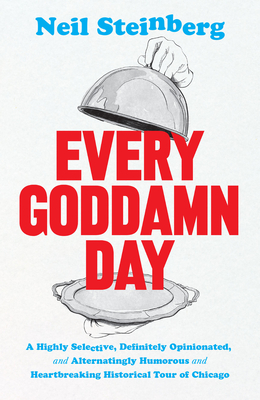 
Currently Unavailable
A daily celebration of Chicago’s history, both known and obscure, and always entertaining.

Every day in Chicago is a day to remember. In a city so rich with history, every day is the anniversary of some storied historical or cultural moment, whether it’s the dedication of the Pablo Picasso sculpture downtown on August 15, or the arrest of Rod Blagojevich at his Ravenswood home on December 9, or a fire that possibly involved a cow on October 8.

In Every Goddamn Day, acerbic Chicago Sun-Times columnist Neil Steinberg takes the story of the city, pares away the dull, eat-your-peas parts, and provides 366 captivating daily readings in what makes Chicago Chicago and America America. It calls upon a wide cast of characters, from Oscar Wilde to Muhammad Ali, from Emma Goldman to Teddy Roosevelt, and from Richard M. Daley to Fred Hampton, to create a compelling narrative that can be read at a sitting or in a yearlong series of daily doses.

From New Year’s Day to New Years’ Eve, Steinberg takes us on a vivid and entertaining tour, illuminating the famous, obscure, tragic, and hilarious elements that make each day in Chicago memorable.

Neil Steinberg is a daily news columnist for the Chicago Sun-Times, where he has been on staff since 1987. His books include Out of the Wreck I Rise and You Were Never in Chicago, both also published by the University of Chicago Press. His writing has also appeared in Esquire, Rolling Stone, Granta, the Washington Post, and the New York Times Sunday Magazine, among other publications.

"Speaking of clever: the Sun-Times’ Neil Steinberg retells the history of Chicago in “Every Goddamn Day” (Oct. 21), as in whatever famous this or that happened on every day in history, all 365 of them."
— Chicago Tribune

"[Steinberg] creates a moving, living picture of Chicago’s past.  . . .  here is Chicago in hundreds of glittering facets, with stories of art, theater, industry, racism, injustice, and sheer goofiness. . . .Witty, economical and often whimsical, he lends color and freshness to each event.”

“The breadth of [Steinberg’s] interests and talents is on full display in his just-published book, Every Goddamn Day: A Highly Selective, Definitely Opinionated, and Alternatingly Humorous and Heartbreaking Historical Tour of Chicago. Each day on the calendar gets its own entry, and, almanac style, Steinberg chooses one event from that day in local history and tells a tale. What emerges is the patchwork quilt of our stunning, infuriating, delightful city stitched together by Steinberg’s deft prose.”
— Eric Zorn