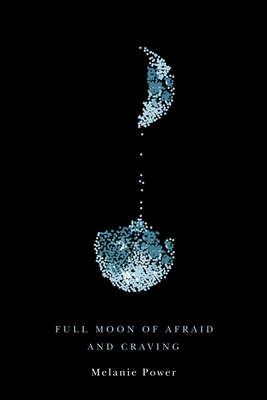 
Ships to Our Store in 1-5 Days
A hometown is a data centre / where the past is stored From a darkly humorous perspective, this book charts a young person’s navigation of narrow definitions of faith, femininity, and family. Confronting addiction, compulsions, and anxieties, Full Moon of Afraid and Craving explores the strange combination of wonder and longing that makes a life. Across settings rural and urban, Melanie Power’s poems commemorate ordinary moments and everyday characters: a roadside shopkeeper, a neighbourhood linden tree, a great-uncle’s hooch. Interrogating lineage and inheritance, she traces the unsettling shadows that border joy. A series of ambivalent odes pay a winking, Proustian homage to the sense memories of a Roman Catholic millennial upbringing in Newfoundland. The long poem “The Fever and the Fret,” written during pandemic lockdown in Montreal, considers how we re-examine and consolidate our personal and civic pasts in times of crisis, drawing timely parallels to John Keats’s confinement due to illness exactly two centuries prior. At times wry and lighthearted, at others elegiac and plaintive, the voices in these poems are controlled and confident. Just as the stars in the sky are best viewed at night, this collection embraces darkness to illuminate rays of moonlight.
Melanie Power is a Montreal-based writer from Newfoundland. Full Moon of Afraid and Craving is her first book.
“These poems look with ardour and humour at what’s beloved and what’s hard to love, reminding us that sometimes those are the same things. The nostalgia-laden, trade-marked, pre-packaged baked goods that make us salivate may also make us cringe; the past self whose actions seem shamefully misguided deserves respect and tenderness. Power can do irony as well as any writer of her generation, but she can also do sincerity, goofiness, even reverence. And she does it all memorably and musically – her speakers and characters might mock notions of eloquence and aplomb but Power speaks through a sonnet or a villanelle as vibrantly and gracefully as through an open, expansive lyric. Heartbreaking and hilarious, this is an impressively accomplished first book, wise beyond its years.” Stephanie Bolster, author of A Page from the Wonders of Life on Earth

“Melanie Power is a poet of the immediate. Like the feral cats that navigate the alleys and sidewalks of the late capitalist east-coast universe she evokes here – her speaker prowls the crumbling infrastructures of the built world, scratching at the seams of language and landscape. What she is surrounded by – rocks, Fun Dip, roadways, roadkill, frozen cakes – ‘all things viscous’ (and ‘vicious’) and ‘sweet’ is what she interrogates. At hand are the fundamentals of a poetry in the lineage of squirrelers of image and rhyme such as Paul Muldoon, and closer to home, Ken Babstock, and Mary Dalton. There is something unerringly honest about these poems that doesn’t so much make one want to cling to the thing being observed, as revel in the briefest glimpses of these treasures caught and rendered with impeccable care – and just as quickly –released into air.” Sina Queyras, author of My Ariel