Planktonia: The Nightly Migration of the Ocean's Smallest Creatures (Hardcover) 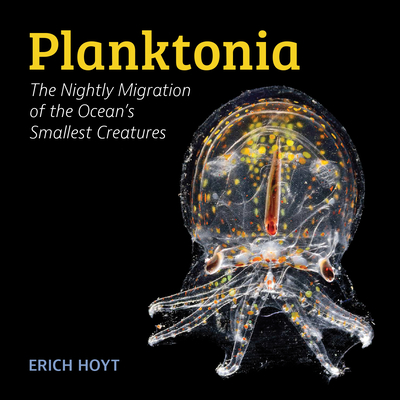 Planktonia: The Nightly Migration of the Ocean's Smallest Creatures (Hardcover)

When people hear the word "migration," they think of animals that move from a feeding area to a breeding area and back each year. But the greatest migration on Earth happens twice every night. The movement is largely vertical and performed by plankton followed by predatory fish, squid, octopus and other species that have acquired a taste for plankton. The migration starts deep in the waters of the ocean at sunset. As they move, the plankton nibble on plant plankton and other tasty morsels in the water and, eventually, some on each other. The feeding ends just before dawn when the plankton retreat to the depths of the ocean to hide during the day until the next evening, when they migrate back up the water column.

In Planktonia, Erich Hoyt invites readers to dive into the dazzling nighttime ocean. Countless microscopic plankton -- larval creatures such as ornate ghost pipefish, left-handed hermit crabs and bony-eared assfish -- ascend to the upper waters to feed, returning to the depths before sunrise. These tiny planktonic creatures are delicate and beautiful; some look terrifying; and most look nothing like the creatures they will become as adults. This great vertical migration attracts larger adult creatures, too, from the solitary 6-inch (15 cm) bigfin reef squid and the fierce and hungry 6 1/2 foot (2 m) female blanket octopus, which is up to 40,000 times heavier than her male mate. Everyone comes here for the midnight feast, and they are all ravenously hungry.

Chapters in this book include:

All life in the ocean depends on plankton. Plankton plays a key role in sequestering carbon against climate change. The great nightly vertical migration highlights the importance of protecting not only ocean species but also ecosystems that embrace ocean processes from the depths of the sea to surface waters.

Erich Hoyt has spent much of his life on or beside the sea, working with whales and dolphins and marine conservation in the world's oceans. A noted conservationist and scientist, he has written 24 books, including the acclaimed Orca: The Whale Called Killer; Creatures of the Deep; Encyclopedia of Whales, Dolphins and Porpoises; Strange Sea Creatures; and the children's book Weird Sea Creatures. He lives in Dorset, UK.