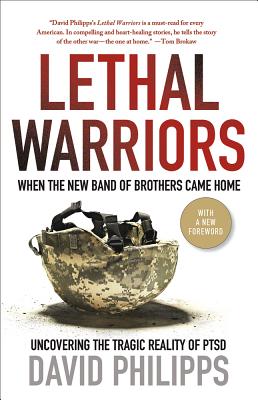 Pulitzer Prize finalist David Philipps brings to life the chilling story of how today's American heroes are slipping through the fingers of society—with multiple tours of duty and inadequate mental-health support creating a crisis of PTSD and a large-scale failure of veterans to reintegrate into society.

Following the frightening narrative of the 506th Infantry Regiment—who had rebranded themselves as the Lethal Warriors after decades as the Band of Brothers—he reveals how the painful realities of war have multiplied in recent years, with tragic outcomes for America's soldiers, compounded by an indifferent government and a shrinking societal safety net.

David Philipps is a features writer for the Colorado Springs Gazette whose articles have also appeared in the Los Angeles Times, the Chicago Tribune, The Philadelphia Inquirer, and The Seattle Times, among others. His coverage of the violence at Fort Carson won him the Livingston Prize for National Reporting and he was a finalist for the Pulitzer Prize. Lethal Warriors was a finalist for the J. Anthony Lukas Work-in-Progress Award. He lives in Colorado Springs, Colorado.

“When the war started, almost a decade ago, we were told we had to fight it in Iraq and Afghanistan so that we wouldn't have to fight it at home. But as our soldiers return from battle, it has become increasingly clear that they are bringing the trauma of war to our doorstep. In exploring the creeping effects of PTSD and its heart wrenching consequences on our veterans, and on our society at large, Philipps' book is a clarion call to both support our troops and to think twice when assessing the true costs of war.” —Susan Sarandon

“David Philipps' Lethal Warriors is a must-read for every American. In compelling and heart-healing stories, he tells the story of the other war--the one at home.” —Tom Brokaw

“A startling and compelling human drama that exposes the raw truth: that the cause of PTSD lies not within the soldier who suffers it, but in the nature of war itself, and what we ask them to endure. David Philipps shows that 'supporting our troops' must mean far more than cheering them on in the field. This book is a must for anyone who cares about our soldiers, the lives of those they touch, and what kind of a country we aspire to be.” —Richard North Patterson, bestselling author of Balance of Power and Exile

“This important and compassionate book will save lives. I found myself weeping with sympathy and sadness for both the murderers and their victims, and boiling with anger at the chain of neglect and ignorance, within and outside of the military, that led to murders that could have been avoided. This book needs to be read by the families of every returning combat veteran. It needs to be read by professionals in mental health institutions, the military, departments of veterans' affairs, and all leaders who care for the safety of their communities. It needs to be read by all of us who care about those who faithfully served those communities in war and returned forever changed.” —Karl Marlantes, bestselling author of Matterhorn

“Even for the survivors of close combat, the emotional impact can be devastating. David Philipps' heartbreaking book is a detailed and tragic record of this impact, and the Army's and society's struggles to deal with the consequences. Every American should read this book -- it is that significant for our Army, and for our country. ” —General Wesley K. Clark (ret.)

“In Lethal Warriors, Dave Philipps unravels one of the most horrifying stories of the Iraq War, the dark saga of the 4th Brigade of the 4th Infantry...Philipps' book has the promise that it may bring to life the devastating impact of the damage wrought by the Iraq War--violence that is even more disturbing because it takes place on the home front.” —Statement from the jury of the Anthony J. Lukas Awards

“Staggering, gruesome and heartbreaking” —On the Media, National Public Radio, on Casualties of War

“A fascinating and long overdue account of the consequences of the Iraq war on the soldiers who fought it, their families and the wider community.” —Tim Pritchard, author of Ambush Alley, on Casualties of War

“A searing exposé that might make readers wonder how Army commanders and civilian warmongers sleep at night given the disgraceful handling of traumatized veterans who fought in Iraq.” —Kirkus Reviews on Casualties of War

“Thoughtful, carefully researched, and beautifully written... It's the kind of story that wins Pulitzer Prizes, that illuminates and informs, and that delights all of us who work for and/or love newspapers.” —Colorado Business Journal on Casualties of War